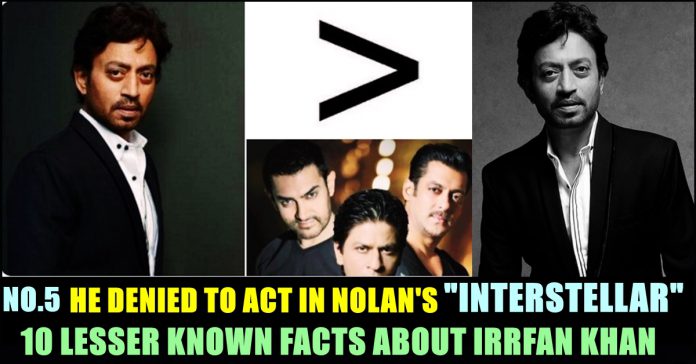 The Demise actor Irrfan who is known for his works in Bollywood film industry, left the entire country in utter shock. The 54 year old actor died of colon infection in Mumbai’s Kokilaben Dhirubhai Ambani Hospital on Wednesday. A statement released by his family said that Irrfan spent his final hours “surrounded by his love, his family whom he cared the most”. The actor has been battling the tumour for several months and returned to Mumbai after getting treated in London. Irrfan was married to Sutapa in 1995 and have two sons.

Entire country including Prime Minister Narendra Modi expressed their condolences to the Family members of the actor. Kamal Haasan in his tweet said that he deserves more time in life. “Too soon to leave Irrfan Ji. Your work always left me in awe. You’re one of the finest actors I know, I wish you stayed longer. You deserved more time. Strength to the family at this time.” his tweet read.

Too soon to leave @irrfank Ji. Your work always left me in awe. You’re one of the finest actors I know, I wish you stayed longer. You deserved more time. Strength to the family at this time.

At this time, Let us look back at some of the lesser known facts about one of most respected actors of Indian cinema.

In a career spanning over 30 years and featuring in more than 50 domestic films, Khan received numerous awards, including a National Film Award and Filmfare Awards in four categories. In 2011, he was awarded the Padma Shri, India’s fourth highest civilian honour. However, the actor, during his earlier days, wanted to become a cricketer. He even got selected to play CK Nayudu tournament but couldn’t participate in it due to lack of funds. He was an all rounder and loved batting more. His captain made him to bowl more and take wickets.

After realizing that he couldn’t make a career out of cricket, Irrfan completed his MA graduation in Jaipur before joining National School of Drama (NSD) in New Delhi in 1984 to study acting. To get a scholarship to study in NSD, Irrfan lied about having theater experience.

Though he debuted in film industry through “Salaam Bombay” in 1988, one of his first job in Mumbai was to repair Air Conditions. He was an AC repairman before becoming an actor.

Commonly the name would be spelled as “Irfan” across the world. But the actor himself decided to add an extra “R” in between his name in 2012 and said that he likes the sound of the extra “R”

The talented actor acted in few Hollywood films such as Life of Pi, Jurassic Park, Inferno, The Amazing Spider man. He was offered to play a key role in Christopher Nolan’s science fiction film “Interstellar”. But the actor turned down the opportunity as it required him to stay at US for four months at a stretch. In the meantime, he did “Lunch box” which is still considered as one of his best works.

Bizarrely, the actor got detained twice at the Los Angeles airport by the authorities as his name was similar to a most wanted terror suspect.

Irrfan Khan is the only Indian actor to be a part of two Oscar winning movies. His films Life of Pie (2012) and Slumdog millionaire (2008) won Oscars for Best Picture in Academy Awards.

During his primetime, Irrfan Khan used to stay awake till 3am in the morning to read through at least one new Hollywood script a week. He used to take notes from them and tried to understand various to play his characters, as a part of his homework.

Irrfan Khan acted in several serials before becoming an actor in mainstream cinema. Chanakya, Bharat Ek Khoj, Sara Jahan Hamara, Chandrakanta, Banegi Apni Bhat are some of the serials he had been a part of.

Even after tasting success in film industry, Irrfan continued to appear in Television. He anchored a show named as Mano Ya Na Mano which is a reality show based on real incidents that are taking place in the various part of the country. The show aired on STAR One. He hosted another programme named Kyaa Kahein which was similar to Mano Ya Na Mano.

Let us pray to god for his soul to rest in peace !!