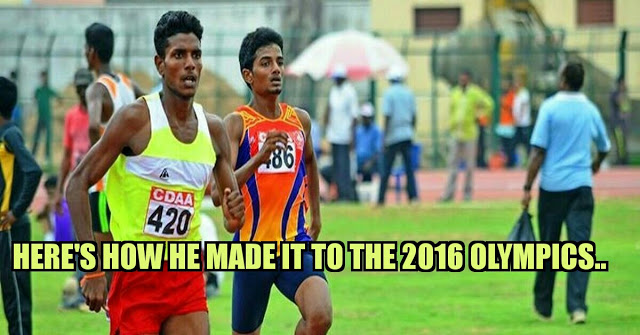 Eight years ago, in the narrow living room of his home on the outskirts of Chennai, 11-year-old R Mohan Kumar watched Usain Bolt streak past the finish line at the Beijing Olympics at record speed to be crowned the world’s fastest man. Much like the thousands who were inspired by the Jamaican’s extraordinary feat, Mohan Kumar too decided that one day he would participate in the Olympics and win a medal.

Now, this tall, strapping 19-year-old is the youngest member of the 4×400 m relay team representing India at the 2016 Olympics at Rio.

Mohan Kumar’s transition from being a participant at local sports meets to a gold medalist in the 400m run at the 2015 National Junior Championships at Ranchi was a result of the long hours put in by his coaches right from Class VI. He was one of the 30-and-odd students in his school who were selected to receive special coaching by D Premkumar, a freelance trainer, every morning. He was also among the very few students who stuck to this rigorous training schedule all through school life.

“Mohan Kumar was no more than an average student in academics,” said K Vasantharuban, the Physical Director of Sri Ramaswami Mudaliar Higher Secondary School, Ambattur, where Mohan Kumar studied. “But in sports, he was very hard-working. In Class 9, there was a struggle to pass, but the management allowed him because he practised so hard in athletics.”

The son of a small-time contractor for the local municipal corporation, Mohan Kumar had a journey to Rio that was fraught with financial difficulties, offset at times by the generosity of his coaches and endorsers, or by loans taken by his father. Once in a while, the family had to pawn his mother’s jewellery to afford flight tickets or expensive spikes to send him for sports meets, said R Poovanan, Mohan Kumar’s brother, who has also won medals at state level athletics meets.

But unlike his younger brother, Poovanan opted out of competition to become a fitness trainer instead. He would take Mohan Kumar for training every day, and also escort him to his events. “I got into sports very late, so I did not have many years of training,” said Poovannan. “Also, our family could afford to send only one person.”


It was only when the residents of Ambattur, a neighbourhood in Southern Chennai, watched Mohan Kumar’s powerful performance at the 2015 Kerala National Games on television – winning gold for Tamil Nadu at the relay event – that they realised that someone from their locality was growing to be one of the top athletes in the country.

“Our locality, Mangalapuram, in Ambattur, has a very bad reputation,” said Poovanan. “If you go to a nearby company and say that you are coming from Mangalapuram, they won’t give you a job, saying that the people from this area are dangerous. Nobody could believe that someone from a slum in Ambattur was participating in the Olympics. One can say that he has wiped away the black mark.”

When Mohan Kumar returned to Ambattur from Kerala after the National Games, he was greeted with great pomp and ceremony. The 19-year-old was garlanded with flowers and sandalwood beads, given cash awards, served lunch several times over, and presented with decorated shawls by Ambattur’s MPs, MLAs, residents and even policemen.

“On an ordinary day, it would take us ten minutes to walk around our area,” said Poovanan. “But on that day, it took six-and-a-half hours. We ended up collecting three whole gunny bags of shawls.”

But Mohan Kumar used little of the money for himself. He always gave everything to our father, said Poovanan. The Rs one lakh presented to him by Chief Minister Jayalalitha in 2015 was used entirely to fund his sister’s marriage.


Although Mohan Kumar’s coaches are delighted with his selection for the Olympic relay team, they are anxious to ensure that he remains focused and as hard-working as ever. MV Rajasekar, Mohan Kumar’s coach for over three years, says that apart from physical training he teaches his students to never fear competition – a skill that he believes Mohan Kumar has mastered.

“All my coaches helped me a lot,” said Mohan Kumar, who is now training for his event in Rio. “Now I am on the relay team. But in the next Olympics, I want to qualify for the individual event. That’s my aim.”

With track events being intensely competitive, Mohan Kumar had to go through several qualifying rounds before finding a place among India’s top six runners for the 4×400 m relay event. This journey meant spending most of the family savings on food, equipment and travel. Luckily, he had some help along the way.

“When there were floods in Chennai, he would have missed the National Junior Championship in Ranchi. I took him there by plane, paying Rs 15,000,” said MV Rajasekar. “Nature has endowed him with rich genetic material to become a medalist. Why should that go wasted? I thought that somehow, I should make this boy run.”

Previous articleThis Is The Reason Why Judges Break Their Pen Nib After Announcing Death Sentence!
Next articleVijay’s Painful Statement About His Recent Divorce With Amala Paul! Here’s What Happened!