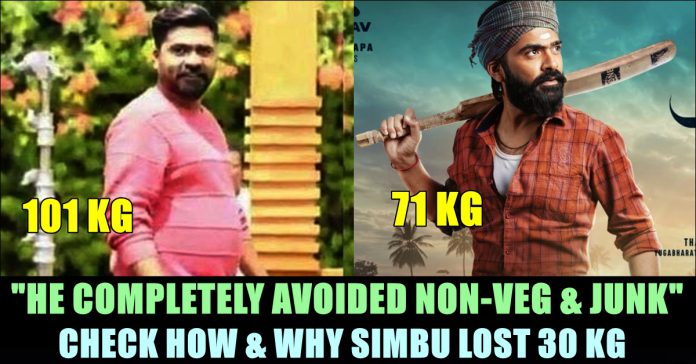 Fans of actor Silambarasan aka STR are extremely happy like never before due to the physical transformation their idol displayed recently. He became the talk of the town with a single photoshoot and the back to back updates he provided about his upcoming films left his fans go gaga. The actor reduced 30 kilograms by involving himself in various kind of activities, thanks to his fitness trainer Sandeep Raj. In an interaction with TOI, Sandeep and Mahat Raghavendra, a dear friend of Simbu revealed what the “Vallavan” actor did to achieve this feat.

After making his come back into the industry after his 2019 flick “Vantha Rajavaa Thaan Varuven”, STR released the first look of his upcoming film “Easwaran” which is being directed by Suseenthiran. Titled as “Easwaran”, the first look of the film showed Simbu carrying a snake in his shoulder with his newly developed physique, wearing dhoti and shirt, standing amidst a Sugarcane farm. Going by the BGM scored by Thaman and the voice over provided by Simbu at the end of the motion poster, the actor seems to be playing a seasoned young cricket player of a rural part of Tamil nadu. It is notable that Suseenthiran is known for his sports drama films such as “Vennila Kabaddi Kuzhu”, “Jeeva” etc.

While starting his journey of “weight loss”, Simbu reportedly weighed 101 kilograms and has reduced 30 kilograms in a matter of months. It all started when Simbu saw Mahat’s toned up body trained by Sandeep Raj, a celebrity fitness trainer. When the actor wanted to start physical training, Mahat introduced Sandeep to him. The duo started working on it since last November. Talking about the experience of training Simbu, Sandeep says that Simbu didn’t lose weight for his movies or to prove a point to others. “He did it for his fans and loved ones who stood up for him during his tough times” Sandeep said.

Sandeep says that Simbu initially wanted to reduce the belly fat. “But training him was a different experience” he said and went on to explain about the new lifestyle of the actor. “Simbu starts his day at 4 : 30 am with a brisk walk. Then we hit the gym and work on various body parts.” said Sandeep who added that they started with strength and resistance training. He said that Simbu used to work out for 4 days a week and now he is working out for 5 days. While sharing about his daily activities, Sandeep says that the actor is a kind of person who loves to do various sports activities and will easily get bored of doing same activity over and over again.

Thanks to the supreme power for guiding & helping me throughout this transformation.
&
Thanks to all my fans for showering unconditional love, your love means the world to me 🙏🏻

During February, Simbu weighed 87 kg, says Sandeep and added that the pandemic didn’t really help him losing weight. The duo resumed their workouts regularly in June month which helped him to become what he is today. Sandeep also lauded the 37 year old actor for his dedication and hard work.

To reduce the weight, Simbu completely avoided eating non-vegetarian and junk food. The actor reportedly shifted to alkaline-rich and nutrition-dense foods as far as food diet is concerned. “Simbu went on a calorie deficit diet and took up liquid meals as his diet.” Sandeep says. To consume the salads that he is not fond of, Simbu used to juice them up and have. “It was a mix of high-protein and low carb diet” Sandeep added. Surprisingly, Simbu, during the process, cooked his own meals according to Sandeep.

Watch the video of Sandeep talking about Simbu’s transformation that is doing rounds in social media :

"Love drives him, only his fans love drive him to such a Tranformation" – @SilambarasanTR_ 's Fitness Trainer Mr.Sandeep | Watch Full Interview: https://t.co/RguV022ESB

Not only Gym workout, sports activities such as basketball, tennis, boxing, rowing and swimming helped him to lose weight, says Mahat Raghavendra who said that he feels proud of this massive come back of his dear friend. On the work front, apart from Eeswaran, Simbu is planning to take part in the shooting of “Maanadu” reports suggested. The actor is also planning to direct a sequel of his blockbuster film “Manmanthan”, according to recent reports.