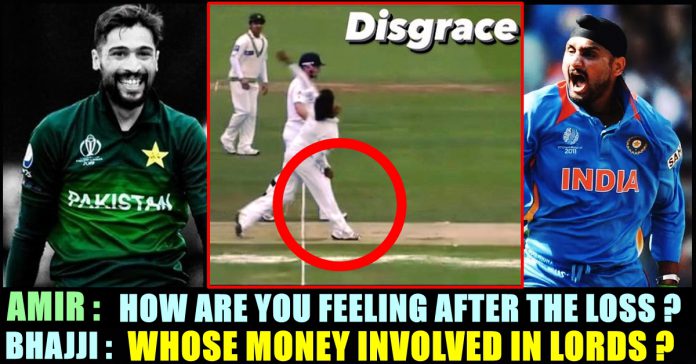 After effects of the match that took place between India and Pakistan is pretty severe as not only fans, even former notable players of both the teams are involved in verbal spat in the micro blogging social media site. Former Indian spinner Harbhajan singh who is known for representing the national team for 18 years, slammed Pakistan’s Mohammad Amir who tagged him and asked how he feels losing against Pakistan in a world cup match. Initially, it looked like a friendly banter but turned ugly when the former Pakistan player used derogatory language to abuse Bhajji after he mentioned about the spot fixing Amir got involved himself in.

Both the players shared 8 tweets in their war of words and it still didn’t end as Amir has been sharing tweets that demean Harbhajan. It all started when Amir tried to pull the legs of Harbhajan by asking him about how heis coping up with the defeat after Pakistan registered their first victory against India in a world cup match followed by a 12 straight losses.

Reacting to his tweet, Harbhajan uploaded a video of himself smashing a six off Amir in 2010 Asia cup to win the match and asked whether it didn’t stream on his Television.

Mohammad Amir, to hurt Bhajji, uploaded a video Afridi smashing consecutive sixes off Harbhajan Singh in a test match. Agitated Harbhajan reminded Amir about the incident where he was involved in spot fixing. The former Indian cricketer went on to ask “What happened in Lords ? Whose money was involved ? How can you bowl a no ball in Test cricket ?” while replying to Amir. “Shame on u and ur other supporters for disgracing this beautiful game” he added.

Amir decided to abuse Harbhajan to make him shut but it only added fuel to the fire of Harbhajan’s agitation. Uploading a picture of Amir bowling a long no ball, Bhajji said that people like Amir only focused on money and asked him to get lost. “get lost I feel yuk talking to people like you for insulting this game and making people fool with ur acts” Harbhajan said.

Harbhajan ended replying to Amir by uploading a video of himself hitting six off Amir and finishing a match for India.

However, AMir continued replying to Harbhajan and shared tweets of his supporters. For the uninitiated, Mohammad Amir, Mohammad Asif and Salman Butt were involved in a spot fixing scandal during Pakistan’s tour off England in 2010. All three were handed substantial bans, but Pakistan decided to bring back Amir in International cricket in 2016. As a result of the tweet war between Harbhajan and Amir, hashtag “Fixer” is trending at top with thousands of tweets flooding against the Pakistan pacer.

Previous articleWhen Chennai Crowd Took A “Master Class” On How To See A “Game” As A “Game” To North Indians !! WATCH
Next article“I Lost All Respect For Raju” – Netizens After Watching Recent Episode

Unlike others, Supertar Rajinikanth who requires to be mindful while delivering his stage speeches due to his stature, is not really preparing and it...

A recent post uploaded by actress Kiran Rathore who is known for pairing up with some of the leading stars of Kollywood cinema including...