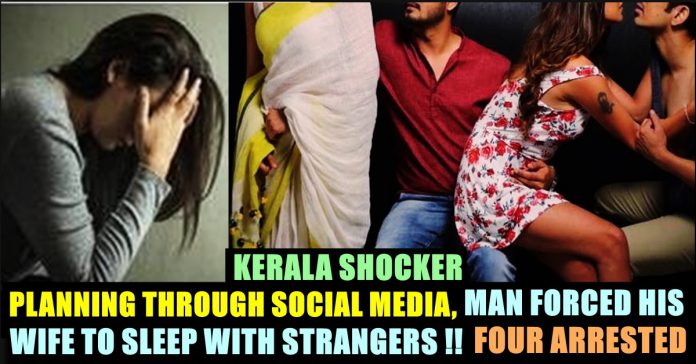 The Kerala police have arrested four men who were allegedly involved in wife swapping after a woman complained to the police that her husband was forcing her to have sex with others he had befriended on ShareChat, an online sharing group.

“She said she was often tortured by her husband, an employee of a travel company when she refused to oblige and threatened to divorce her,” a police officer said. “She said while two women were willing to such relationships she and another woman opposed it vehemently.”

Police said the complaint was filed at Kayamkulam police station in Alappuzha district a week ago and four men were arrested on Friday after preliminary inquiry. A local court later remanded them to judicial custody for two weeks. The four men are in 25-35 age- group and hail from middle-class families. A senior police officer said this is the first such case reported in the state involving a social media platform for wife swapping. He said many such sites were under the scanner of cyber wing of the police.

“Usually in WhatsApp and Messenger, you know who you are talking to. But in ShareChat there is a provision to communicate without revealing your identity or contact details. So they reached a mutual agreement and fixed the date, venue and time,” the investigating officer said.

Kayamakulam station house officer C S Sharon said the prime accused, addicted to online chat, came in contact with a couple in Kozhikkode in March 2018 and established good rapport with them. Later both started frequenting each other’s house and two more couples also joined them. The complainant said she was not willing to continue such a relationship and some men were very violent in nature.

Police were alerted by the victim after her husband insisted she has physical relationship with several men. “During the course of the investigation, we arrested four men including the victim’s husband. They have been charged under Section 366 IPC for luring/intimidating a woman for sexual favours,” the officer told India Today TV.

According to the victim she was taken to the houses of Umesh and Blesarin and was compelled to have sex with them in spite of refusing. The woman filed a complaint with the local police after her husband continued to force her.

Police said the racket was going on for more than a year and the woman decided to stop it when her husband tried to widen his net. Police have registered cases under sections 366 (kidnapping or inducing a woman to compel her marriage), 354 (assault on woman with the intent to outrage her modesty) and 376 (rape) of the Indian Penal Code (IPC).

On 20th of August, entire film fraternity prayed for the recovery of the legendary playback singer SP Balasubramaniam who got infected with the COVID...

Varun Chakravarty Requests For A Meeting With Vijay To This Actor !! WATCH

Varun Chakravarty got a call from team India to represent the national team in the upcoming T20 series with team Australia. This news has...