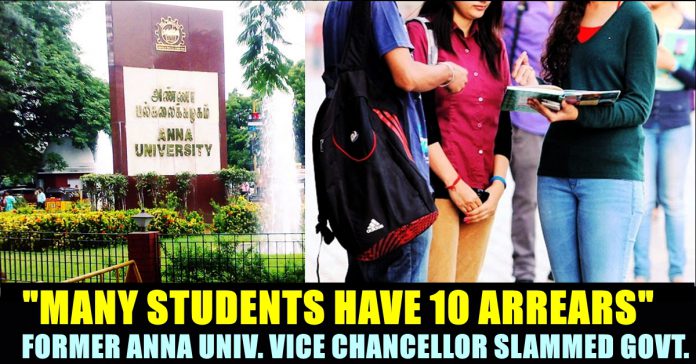 While students who didn’t pay fees for their semester exams are forcing government to give them a week’s time to pay their fees, Vice Chancellor of Anna University E. Balaguruswamy released a press note (on 27th of August) slamming the government for making them pass without writing their exams. The educator, in his note, said that most of the students have 10+ arrears and questioned how could they be declared as pass just because they have paid their fees. Read : Students Who Didn’t Pay Exam Fees Seeking Government’s Help !!

Days ago chief minister Edappadi K Pazhaniswamy announced that the exams for college students will be cancelled due to the increase of numbers in COVID 19 positive cases in Tamilnadu and declared that the students who already paid fees for their examinations will be passed without writing their exams. While answering to reporters, he said that he made this decision considering the amount of depression and anxiety being faced by the students in this pandemic situation. When the press asked him whether this decision would gain him votes, the Chief minister said that the question is unnecessary.

The announcement which was made on Wednesday is applicable for the students who were preparing to write arrear exams as well. However, final semester students must write their exams in order to get their degree. “The state government has already granted exemptions to students who were to appear for the regular exams” Chief minister Edappadi Pazhaniswamy said in his statement.

“Accepting requests from the students and keeping their welfare in mind, and based on the recommendations made by the expert committee set up by government of Tamil nadu, examinations for students who were registered to write their semester exams by paying the exam fees, except the final semester exams, will be cancelled as per the guidelines of the University grants commission and All India Council for technical education and marks will be provided to them” the statement said.

Reacting to this announcement, Professor Dr. E Balagurusamy who served as Anna University’s vice chancellor earlier, differed with the Government’s decision. “It is really very strange and unfortunate that the Tamil Nadu government has announced the cancellation of the arrear exams of all students (except final year) based on ‘students’ demands and expert panel recommendations’,” statement of Balagurusamy read.

“Universities do not conduct exams and give results based on ‘whims and fancies’ of students and politicians. Universities are highly autonomous bodies and their syndicates, senates and academic councils have all powers and authority and they can only decide about the conduct of exams and passing of results. Governments have no right in interfering in the academic matters of universities and unilaterally cancel the exams,” his press release read.

“It is high time that Vice-Chancellors wake-up and realise their autonomous status and resist any such unethical moves in the interest of the quality of education and image of the universities. Exempting students from writing semester exams is one thing and cancelling failed students’ arrear exams and making them pass is entirely a different thing. People should not confuse these two,” the former member of UPSC said.

“I understand that many students have more than 10 arrears and scored even less than 20% marks in most subjects. How can a university declare these students pass just because they have paid the exam fees?” the educator asked. “It is absolutely ridiculous. Such an action will not only lower the academic standard of the university but also affect its credibility badly. It is unimaginable to see a world-class university like Anna University implementing such a lopsided decision. It is very sad that university academic bodies have been made irrelevant,” he added.

Check out his press release here :