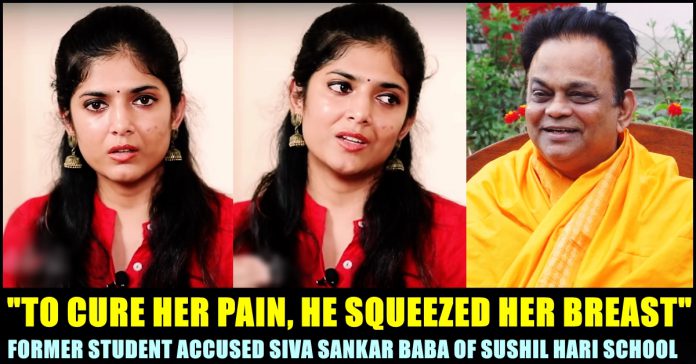 Amirtha, former student of Sushil Hari International Residential School appeared in an interview with Nakkheeran youtube channel and accused Siva Sankar Baba of sexually harassing girl students in the pretext of protecting them. She said that the school terminated her during her 11th standard when she started talking about the harassments that were taking place inside the school campus. The school management alleged that Amirtha gave text book to a male student with a letter in it and terminated her. She who struggled get an admission for 12th standard in other schools, narrated the ordeal she went through while studying there from 9th standard to 11th standard.

Amirtha said that Siva Sankar Baba who owns the school, used to portray himself as lord Krishna and demanded girl students to act like Gopika to sexually harass them. After the issue that took place in PSBB school came to light, a series of screen shots accusing Sushil Hari School and Siva sankar Baba of harassing female students. Initially, the school management denied the accusations and invited media to visit school premises to know about the truth.

However, the latest interview of a former student has shocked the Internet as the accusations she made were extremely disturbing. She said that the school management impressed parents and students with the infrastructure which contains the temples for all the religion. “Baba would say that he got message from Lord Murugan and Lord Krishna. We, non-devotees would just laugh at such activities of him. But the devotees who are living there are treating him as a God” Amritha said in the interaction.

Amirtha went on to reveal that Siva sankar Baba demanded girls to hug and kiss him to greet him and he made parents of the students believe that it would pass the energy to the students. “Boys have to shake hands with him but girls must hug and kiss him to greet him. He did it in front of parents and did it without their presence. We, girls know the difference between good touch and bad touch” she said.

The school management appointed a spy between students to report about other students. “Teachers wouldn’t ask us directly but they would reduce our marks, complain about us to our parents etc.” she said. “They gave me TC while was in 11th. He had hugged and kissed me but I am not a victim.” said Amirtha and revealed about what her friend told her about Baba.

“When she said Baba about her family problems, Baba made her close her eyes and squeezed her breast saying that it could cure their pain. When she complained about it to the warden, he asked her not to complain about Baba and said that he is “God”. The warden also said that Baba does the same treatment every one” Amirtha said. “They believe Siva Sankar Baba as Lord Krishna and all the girls as Gopikas” Amritha said.

“Baba would say that he is the father, boy friend, husband and everything to the girls. There is something called dating session in that school. He would also give alcohol to students through teachers. When I started talking about it, they gave me TC and terminated from the school. It is not because I gave text book to a guy or I scored low marks. They made by parents believe that I am not studying well. To prove myself, I joined a school in 12th after so many struggles and became topper of that school.” Amirtha said.

She also revealed about another incident where he harassed a student who went to tell him about her problems and believed that it could have been going on in that school for past 25-30 years. Amirtha wanted parents to believe children when they say something. “Parents should give space to children to talk about what are happening in their school. While I was studying, they separated me and my parents. My parents won’t believe me at that time. Only after completing school, my parents realized that the problem is in school. Talk to your children daily about their school” Amirtha requested.

Previous article“Nayanthara Is Having A Good Life Because Of Me” – Tamil Actor Released Video
Next articleGayathri, Madhuvanthi & Many Others Condemned TN Government For Allowing TASMAC To Function !!

Popular Tv actor Kumaran who is known for his appearance in Vijay Tv's "Pandiyan Stores" serial has posted an emotional video regarding the demise...