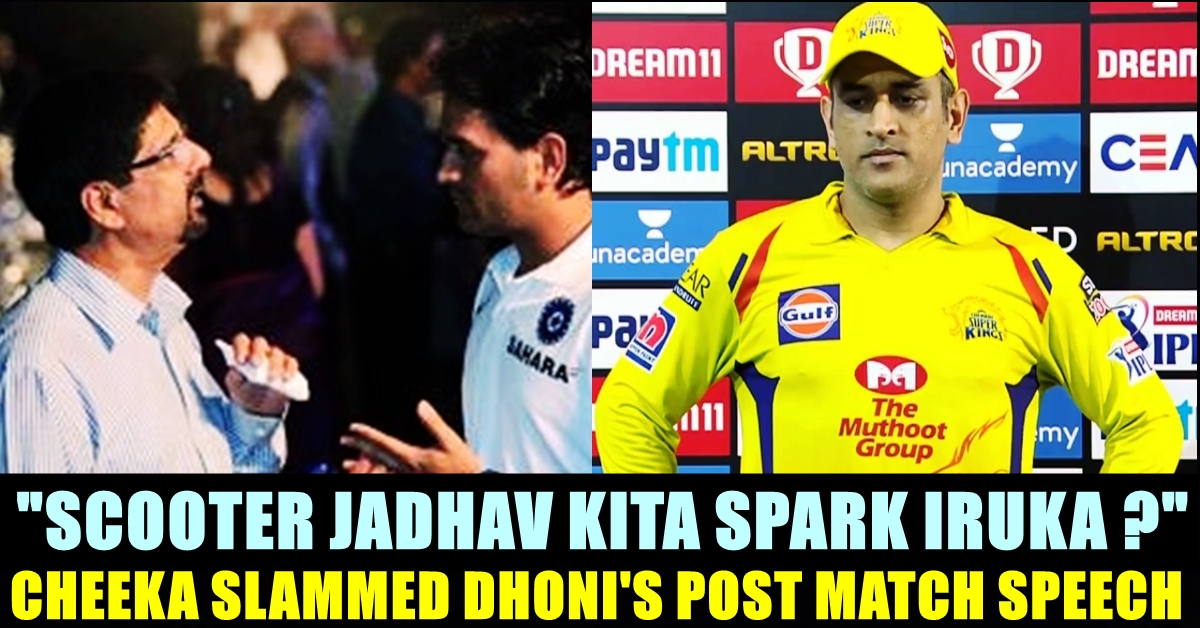 Former world cup winning Indian player and former selector of BCCI Krishnamachari Srikkanth who is fondly called as “Cheeka” by fans got extremely disappointed on seeing the post match speech of Mahendra Singh Dhoni, captain of Chennai Super Kings. On seeing Dhoni’s perception towards process, the former selector said that his process of selecting team is itself wrong. The commentator also expressed his disagreement towards Dhoni’s statement about giving chances to youngsters in the upcoming games.

“I won’t accept Dhoni’s statements at all. He is always talking about process and trying to create a theory, I won’t accept it at all. Your process of selection is itself flawed.” said Cheeka, the former Chief selector of Indian cricket team.

“You are saying that youngster Jagadeesan didn’t show spark but you saw that spark in Jadhav ?? Come on, This is all ridiculous, I will not accept this answers and all today” he added.

“You kept talking about “process” and now CSK almost lost the tournament’s race. You are saying that you are going to see whether youngsters are showing spark in the coming matches. Come on ya, Jagadeesan showed some spark.” Cheeka slammed Dhoni. Further he went on to question Sadagopan Ramesh who totally agreed with Cheeka’s statements.

Cheeka not mincing his words one bit & echoing the thoughts of all CSK fans. @KrisSrikkanth pic.twitter.com/3BkFNN6tuE

Check out some of the reactions for Cheeka’s comment :

Srikkanth on MS : you can be a pistha, but don't say they don't have spark without even trying them. You dropped a player who performed and replaced him with scooter (kedhar)

After winning the toss, Chennai Super kings decided to bat. With a mediocre start and poor batting in the middle order, the team managed to score 126 runs in the 20 overs which is the least by a team in their first innings in IPL 2020. Rajasthan Royals, despite of losing early wickets, chased the total pretty comfortably and pushed Chennai Super Kings to the last spot in the points table.

“Fair enough, this season we weren’t really there. Also there were few chances to the youngsters. Maybe we didn’t see the kind of spark that they could’ve given us to say okay you know push the experienced guys and make space for them. But what this result has done is give those youngsters whatever is left in our league stages. They will get a chance and have no real pressure on them so they can go out and express themselves. And give us the option of looking at the other options in the batting lineup or where they’d like to bat.” said Dhoni in his post match speech.

His speech didn’t go well with the fans of the CSK franchise. Many of them believed that Jagadeesan who played in place of Jadhav in one match showed the spark Dhoni needed. They also said that he could see the spark in youngsters only if they are given a chance.

Internet Demands Immediate Arrest Against The Guy Who Made Rape Threat To Vijay’s Daughter !!
Vanitha Vijayakumar’s Official Statement On The Speculations Of Media !!