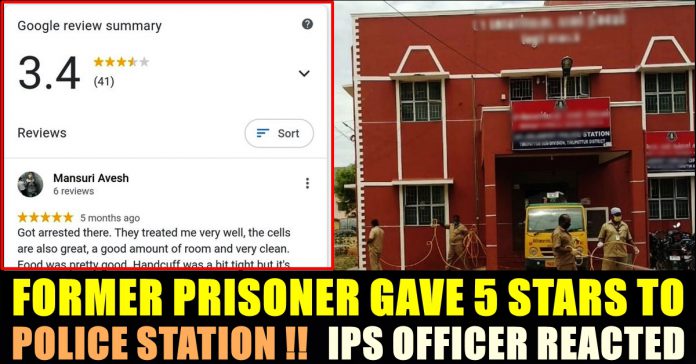 Reviewing a hotel, restaurant and even a movie we watched lately on social media became common in this digital era. Rating our experience at hotels and restaurants on Google maps also became a common practice for smart phone users as the application often prompts its users to mark and review the places they visit. Now, to our bizarre, a prisoner who got arrested by the Police, has posted a review for the Police station he stayed. Five months after he posted the review, the screenshot goes viral as an IPS officer shared it in his official twitter account to let his followers know about it. The prisoner, in his review, had said that he wants to visit the Police station again.

The device which is pre installed in android phones, lets users to rate and review any establishment they visit. Such places are usually the ones that are marked on Google maps. Strangely, a five month old review of a prisoner to a police station is going viral in social media platforms after an IPS officer shared it.

The Naya Nagar police station that is located in Maharashtra’s Mira Bhayander is the station that got reviewed by Mansuri Avesh, a former prisoner. He gave the Police station a five star review and had some positive things to say about the place.

He said that he was treated very well at the Police station, which had clean cells and good food. While concluding his note, he said that he wants to visit the place again if he gets a chance. “Got arrested there. They treated me very well, the cells are also great, a good amount of room and very clean. Food was pretty good. Handcuff was a bit tight but it’s good, it does the job. The officers are also kind. Overall, it was a very good experience and would definitely go there once again if I get the chance too,” Avesh wrote in his review. Reports suggests that Mansuri served as an undertrial prisoner at the police station.

Check out the review below :

IPS officer Santosh Singh shared the review in his official twitter account and made it go viral. He also tagged some of his fellow officers in his tweet and asked them to assess the review. “The police station is so good that someone wants to come back again” Santosh wrote in his tweet in Hindi language.

Followed by this review of Avesh, many other users posted similar reviews and left compliments for the police officers. However, it is unclear whether they visited the station like Avesh. Last year, a man from Tamil nadu named Logeshwaran, gave 4 star rating to the Police station and mentioned the police officers as “Staffs”. Logesh who got detained for not carrying bike documents, says that the station was clean and located in main road. He even appreciated them for not harassing him.

“I Got lock up in this station for traveling on mid ni8, without bike documents…. station is clean and placed on main road… Staffs are very kind they didn’t treat any harrassment. They released me after collecting details and finger print without any bribery… Must visiting place in your life…,” wrote Logesh in his review.

Here’s the screenshot of his reveiw :

Previous articleVanitha Slammed Archana For Her Arrogance !! WATCH
Next articleMemes & Reactions Are Pouring On The Global Outage Of Google Service !!

“How Much Money You Paid For Camera Man” Asked An Insta User !! check How The RCB Girl Replied !!

Deepika Ghose, who became an overnight sensation after being spotted cheering for Virat Kohli’s men in one of Royal Challengers Bangalore’s games in the...