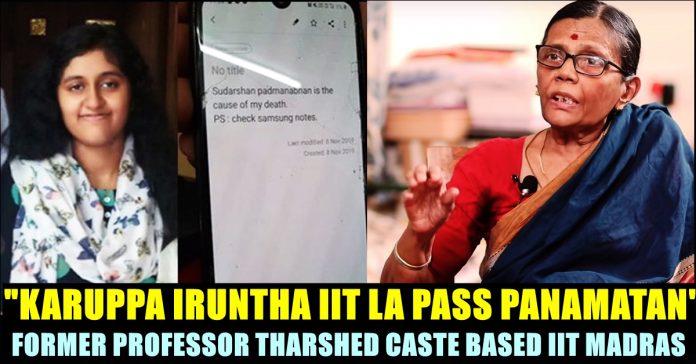 The death of Fathima Latheef, a student of IIT Madras created massive outrage in the state. 19 year old Fathima Lateef was from Kollam, Kerala, and was admitted to IIT Madras in July. She was found dead on November 9. Death of the student created huge outrage in social media as her last note stated that one of a professor, Sudharshan Padmanaban is the cause for her death.

Fathima Lateef had allegedly committed suicide by hanging herself from a ceiling fan in her hostel room. She was found dead in her room on November 9. Fathima Lateef was a native of Kerala and was pursuing an integrated MA program at the institute.

Fathima Lateef was staying at the Sarayu hostel at the campus. Following the incident, the police, in its primary investigation, had revealed that Fathima Lateef was separated from her family for the first time and had scored poorly in her internal exam.

Meanwhile a former professor of IIT Madras who worked there for 28 years long has slammed the management called the death of Fathima as “Institutional Murder”. She alleges that it is a “killing” took place because of the caste and religion based educationalists who works for the management.

Professor Vasantha Kandasamy further stated that there won’t be more than 10 muslim students had passed out from IIT Madras in the 28 years of her career span. To our shock, Vasantha Kandasamy even revealed that IIT Madras didn’t accommodate room for a dalit student who registered for PHD for the first time in 1996. “They (IIT Madras) didn’t encourage me because I raised my voice for my students”. she said while interacting with the host of Nakkheeran TV. Professor even says that the IIT Madras management made her suffer throughout her career without recognising her achievement.

WATCH THE INTERVIEW OF HER BELOW :

In one of her statement Professor has said that a student couldn’t pass out if he looks dark. “I have written 130 books which are bound volumes. They are available in internet for free. If someone really has the efficiency in Mathematics, I challenge them to write at least 5 books each. I even written 1000 research papers and I challenge them to find a flaw in it or if it is copied” challenged Professor Vasantha Kandasamy. This interview of Professor Vasantha Kandasamy goes viral across the social media platforms. Check out some of them below :

Too many discrimination , even the skin color. Karuppa irundha nee fail than,

Thank you Vasantha Kandasamy for opening up the issue openly! https://t.co/lLIe1Icztk

Everyone should aspire to be like Prof. Vasantha Kandasamy, she stood for What is right against all the odds single handedly. A big salute. https://t.co/LfOt0Z0ok7

And the current batch of 'my goal is to get married' non-Brahmin Tamil women. 😐

Comment your views on this interview of Vasantha Kandaswamy !!

Previous articleThis Strategy Used By Coach Michael Of BIGIL Was Also Copied ?? WATCH !!
Next articleGuy Posted Negative Comment On BIGIL Anitha’s Picture !! Check What She Did !!

After Launching his political party Makkal Needhi Maiam, Kamal Haasan, announced that he is hosting the second season of BIGG BOSS too. Initially he...