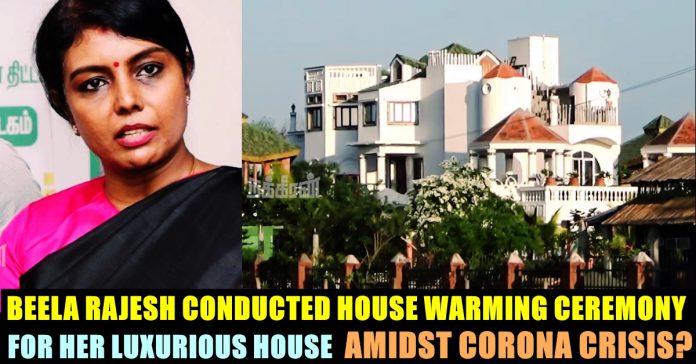 A report on former Health secretary Bheeja Rajesh conducting a house warming ceremony amidst the severe Corona crisis grabbed the attention of the social media users. On 12th June, senior I.A.S officer J. Radhakrishnan replaced Bheela Rajesh as Health secretary and she was posted as Secretary of Commercial taxes and registration department. Now, this report from Nakkheeran raised the eyebrows of public as the house that built by the Bheela Rajesh-Rajesh Das couple is reportedly worth Rs.150 crores.

The new house of the couple is located in a village named as “Thayur”. Majority number of people who lives in that village which is located in Old Mahabalipuram road, between Kelambakkam and Thiruporur belongs to scheduled caste, says the report. Koman nagar near Shiv Nadar university in Thayur acts as a place meant for the luxurious houses of 56 IAS and IPS officers of Tamil nadu. Among the many bungalows, the spectacular house of Bheela Rajesh- Rajesh Das couple was built in a area of three and half acres. Rajesh Das is currently serving as an Additional Director General of Police in Tamil nadu.

The house warming ceremony for the new house took place recently, according to the report. When the reporters of Nakkheeran magazine tried to gather informations regarding the house by visiting the location, Police officers who were present there tried to shoo them away. People who lives nearby, has revealed that the house is being built for past 9 years. The two floor bungalow, consists a swimming pool, a gym, an artificial pool for fishes and birds with seats in the center to sit and another house with a separate room for safety guards. As the house was located amidst a lakeshore, preparations such as cement road for two and half acres and pebbles were also made not to let water inside the house during flood times.

The construction work of the house was started when Bheela Rajesh was working as an I A S officer in Jharkhand. The report of Nakkheeran says that Rajesh Das asked Rs. 3 lakh to a retired professor who requested him to help constructing a proper road in the area. A cent in that a area costs Rs. 3 lakhs whereas the Rajesh couple owning a 350 cents. In that land, the farm house which occupies one and half lakh square feet would worth Rs.150 crores, says the people in that village who are involved in land business.

When Bheela Rajesh was asked about this luxurious house by Nakkheera reporters, the former health secretary, reportedly said that the house was build with the money presented by her father in the year 2000. “We finished building it recently. I own a house in Kottivakkam and this house in Thayur is also my property. This was bought and built with proper permission from government.” said Bheela Rajesh who asked the magazine reporters not to write about it as she was already depressed due to the recent transfer of her post.

When ADGP Rajesh Das was contacted, he said that he bought the land during 1999. “I bought the land when its worth was Rs. 2 lakh per acre. After buying it took 7 years to complete the construction work. I received loan from HDFC bank to build the house and still paying my monthly due. This is a property belongs to me and Bheela Rajesh has nothing to do with it.” the police officer said according to Nakkheeran.