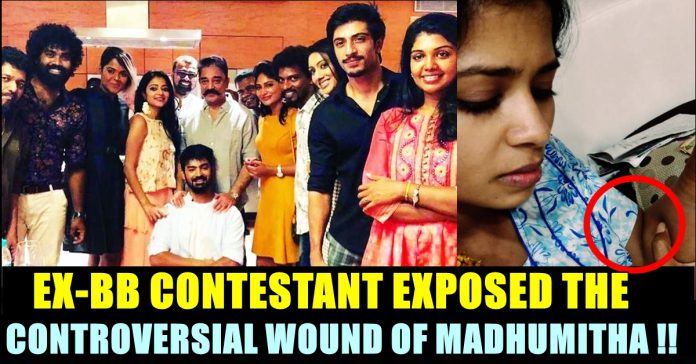 Bigg Boss Madhumitha was terminated from the Bigg Boss house due to breaking the rules of Bigg Boss show. Madhumitha was considered as one of the contestant to win the title. While terminating her, Bigg Boss said that during an argument between Madhumitha and the housemates after a task, the OK OK actress hurted herself to prove a point she stated.

Now she gave her first ever interview to media houses which is going viral across the Internet. Her statements revealed the dark secrets of the Bigg Boss house, especially things that happened on that particular day. Daniel Annie Pope, former contestant of Bigg Boss show and one of the leading comedy actor has now revealed the picture of her wound and posted it in his official social media accounts.

This made me to speak for #madhumitha (zoom n see )

Check out some of the reactions for Danny’s post :

Paavam Madhu ! What a mental torture she should have experienced

Omg not able to see. What the hell BB team was doing when she was cutting. Shame on BB team and this show. Madhu be strong

Madhumitha and Danny worked together in number of films and their first and popular collaboration was from Vijay Sethupathy’s Itharku Thana Asaipattai Balakumara. Both of them rose to fame through the film and gained face recognition from Tamil film audience.

Daniel, in this earlier interview with Indiaglitz, says that he met Madhumitha and was shocked to see the depth of her injury. “She said that she couldn’t lift things but she is alright. She asked me to inform everyone that she is alright. Madhu is a kind of a woman who damages others instead of damaging herself. I myself couldn’t believe that she did this to her” said Danny in the interview.

In the recent press meet, Madhumitha clearly says that she has been harassed by the gang which consists of 8 members on that day of the incident happened. Even after cutting her hand, no one cared for her it seems. She thrashed the contestants for their behaviour on that day and expressed her gratitude for Cheran and Kasthuri for caring for her.