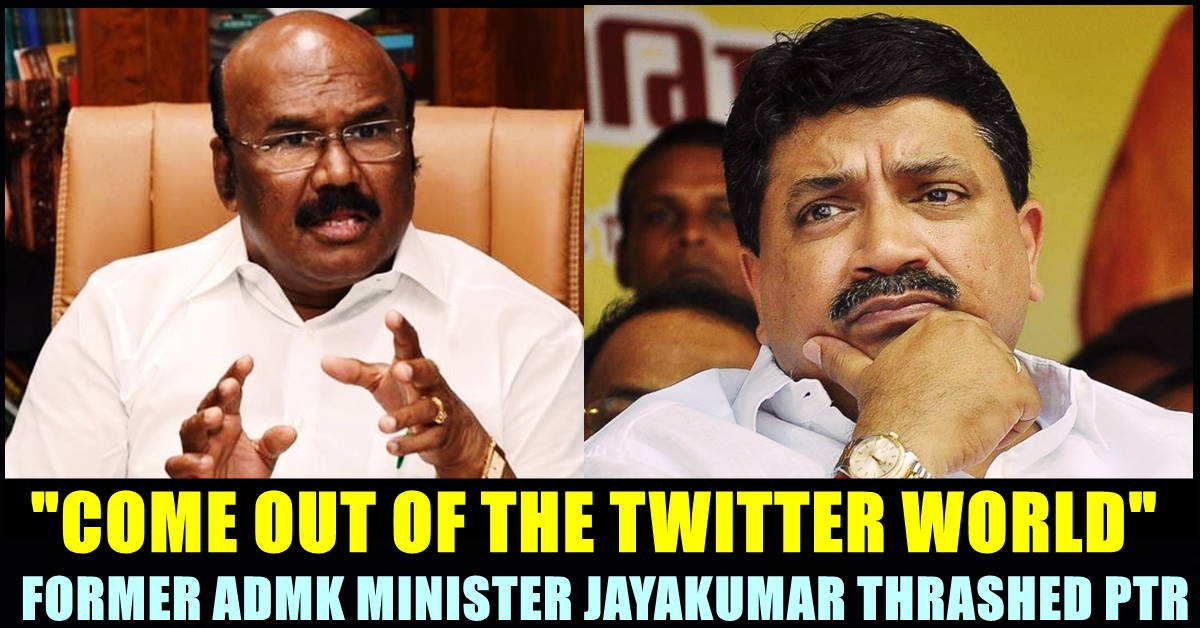 In the issue that took place after Tamil nadu finance minister Dr. Palanivel Thiaga Rajan failed to attend the GST council meeting in Lucknow, former ADMK Minister D. Jayakumar came up with a press note, strongly criticizing PTR for the reply he made earlier. Jayakumar advised PTR to attend GST coucnil meeting like a good student who attends classed in an uninterrupted manner. The former ADMK minister blamed PTR for disrespecting others and also criticized the way PTR is replying to others in Twitter.

It all started after PTR refused to attend the GST council meeting, citing his commitments in the constituency. He also said that nothing important would be discussed in the meet, as per the agenda has been sent to the states initially. While he was asked on why he skipped the meeting, PTR said to media that he had received the invitation for the meeting only after 10th of September and that he had committed to participate in many events that took place in Madurai city. He also stated that he informed Chief minister MK Stalin about it.

“As per initial agenda sent to the states, nothing had seemed important” said PTR by adding that Finance secretary and Commissioner for Commercial taxes would attend it on his behalf. Along with Tamil nadu BJP leader K Annamalai, former minister Jayakumar also questioned Jayakumar for not attending the meeting.

D Jayakumar, Ex-Minister of Tamil Nadu, posted a tweet saying that he is worried that Finance Minister P Thiaga Rajan didn’t attend the meeting and that none of his reasons are valid. He also mentioned that he has never missed any of these meetings. He has attached images from his meetings.

The finance minister has replied to the tweet saying that he was waiting to expose the ones ignorant of the rules of the GST council. He has added that he didn’t expect a big shot like Jayakumar to get exposed.

I WAITED to snare bigots & morons into exposing their ignorance of GST Council norms, BEFORE I posted the 14-page note I sent (ACCEPTED by Hon'ble Union FM & Council & RECORDED)

Now, in a way of replying to the tweets of PTR, Jayakumar came up with a long press note, strongly criticizing the finance minister. Jayakumar said that it doesn’t look good to see PTR abusing elders and youngers in twitter after being appointed as the finance minister of the state and quoted a famous Tamil saying to denote that the TN FM is behaving this way as he got a designation which he doesn’t deserve.

After quoting the achievements of AIADMK government led by “Amma”, Jayakumar said that there is not chance for PTR to know about such achievements as he entered politics only after 2016. He also criticized DMK party and linked the flaws of the party with PTR’s absence in the recent GST council meeting.

“Puratchi Thalivar MGR sung that one should maintain humbleness and braveness when he is entitled with a position. That song suits you well. It looks that you don’t know how to behave civilized and you seem to have left it in America.” Jayakumar said that mentioned about his education qualification. “I never showed arrogance like you just because I am an educated person” he added.

Further, Jayakumar said that he was studying about the state’s economics through experience since 1991 and added that education about economics and filed economics is different.

Jayakumar also stated the reason behind why he didn’t attend the GST council meeting on 16th of March 2017. “Unlike you who failed to attend GST meeting to attend the baby shower function, I filed the economic status of the state as I was the finance minister of the state at that period” Jayakumar said through his press note and advised PTR to restrain himself from the Twitter world and asked him to think about people. “Attend GST council meeting like a good school student who would attend his classes regularly” he concluded by adding that he is an elder brother for PTR, even in Politics.