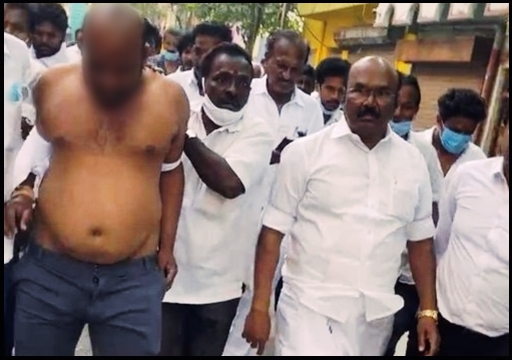 On Monday, Former Minister of Fisheries D. Jayakumar got arrested along with 40 other members of AIADMK party for poll violence. The incident happened a day after the urban local body polls were conducted in Tamil nadu. The former minister has been accused of causing violence at the 49th ward in Chennai’s Vannarpettai. Jayakumar who accused a DMK cadre named Mahesh of bogus voting. This led to a row and the AIADMK members led by Jayakumar  made Mahesh to remove his shirt and made him walk in the streets.

Ex-Minister D Jayakumar arrest – glimpse of the incident that happened. The ex-minister, along with AIADMK cadre, had assaulted the DMK cadre in ward 49 and forcefully tied his hands up & recorded a video of him.👇🏽 pic.twitter.com/nzz1ysApW7

Video of Mahesh getting assaulted and being dragged without his shirt on the streets circulated in social media platforms ever since the incident happened. The viral video showed Jayakumar and his cadres questioning Mahesh on how many fake votes he made. It is also reported that Jayakumar and AIADMK cadres tied Mahesh’s hands after removing his shirt.

As a reaction to this incident, over 30 police officials arrested Jayakumar from his home. “We were having dinner, around 30-40 police personnel arrived. They opened the door and barged inside. He was in lungi and asked them to wait till he changes his clothes. They did not allow it and took him away. What is the crime he committed ? Just opposed fake voting” Jayakumar’s wife said to the media portals.

The former minister was taken to the Nungambakkam police station in Chennai. Cases under 10 sections of the Indian Penal Code were filed against him including assault, criminal intimidation, verbal abuses. He is expected to be producer before the Egmore Magisterial court latter, according to reports.

@chennaipolice_ registered a case against former state minister D Jayakumar under eight Sections for thrashing a man and dragging him semi-naked to the police station suspecting him of attempting to capture the polling booth at Royapuram. @aselvarajTOI pic.twitter.com/o1tdICfbn4