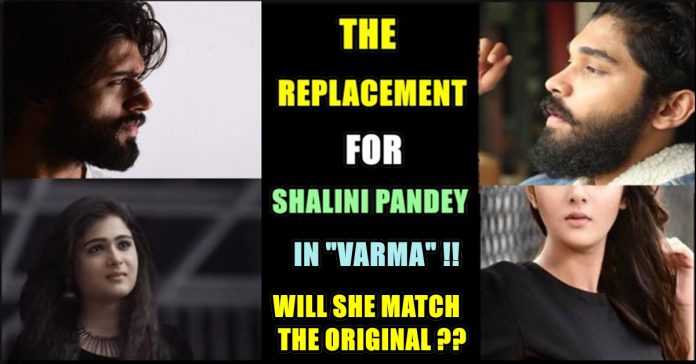 The Tamil remake of recent Telugu blockbsuter Arjun Reddy will mark the acting debut of actor Vikram’s son Dhruv Vikram. It has now been made official that the project will be helmed by director Bala, know for directing path-breaking Tamil films such as Sethu, Pithamagan and Paradesi. In fact, it was Bala who gave Vikram his first major hit via Sethu, which was later even remade as Tere Naam in Hindi. Earlier Vikram made the announcement via his Instagram page and added that he’s proud his son is getting to work with a director par excellence. The news of Bala directing the film was received with mixed response by audiences as most felt he’s never made a film in an upper class setting and it’d be really interesting to see if he proves everybody wrong. The project is expected to roll from later this year. Vikram is taking all the right steps to ensure he creates the best launch pad for his son. Last year, when Dhruv directed a short film on child abuse within a family called Goodnight Charlie, people assumed that he’d explore a career in direction. The film will be bankrolled by E4 Entertainment, known for producing well-known Malayalam films such as Ezra and Godha. During the film’s announcement, producer Mukesh Mehta posted on his Facebook page: “We are extremely happy to share that Dhruva Vikram will be essaying the lead in the Tamil version of Arjun Reddy. We are honoured by the opportunity and confidence shown in us by Vikram and we will work towards making it a memorable launch.” Directed by Sandeep Reddy Vanga, Arjun Reddy was a modern-day take on Devdas; a story of a brilliant, alcoholic medical surgeon with serious anger issues.

Presenting the director par excellence who will present Dhruv to the world. #⭐ingdhruvvikram #arjunreddyremake #thankyou4watchingthisspace#congrats2thosewhoguessedright

Now the Internet has officially confirmed the heroine of this remake of “Telugu Blockbuster” which was named as “Varma”.

The film featuring actor Vikram’s son Dhruv, seems completed. A remake of the Telugu blockbuster Arjun Reddy, the movie marks the debut of Vikram’s son to the silver screen. Now the teaser of the film released few days back. Check out it here :

Earlier, there were speculations doing the rounds that Sillunu Oru Kadhal fame Shriya Sharma will be playing the lead lady in the movie.

Now, as per the latest reports, Megha Chowdhury, a top model from Bengal, has been cast opposite Dhruv in the film. Here’s her photos :

Look around and find your reason to be happy.

Do you know any better place?! #angel #myhappyplace

A film I’m so proud being a part of. Thank you #balasir for giving me Megha Hariharan, thank you Mukesh sir @e4entertainment.in for making this film happen, @dhruv.vikram Varma wouldn’t have been Varma without you, thank you @the_real_chiyaan sir you’re a huge inspiration and it feels great to have your blessings. And lastly thanks to each and everyone of you out there for showering so much love and blessings. Teaser link in bio 🙂

A beating heart of stone You gotta be so cold To make it in this world!!

Woke up to this so here it is featuring in Kumudam for my very first Tamil film #Varma directed by the legend sir #bala.. thank you everyone for all the love and luck. P.S if you read Tamil go grab yourself a copy cause there’s a lot more inside.

Do you think she will match the performance of Shalini Pandey ??

Previous articleVideo Of Bhuvaneshwar Kumar Losing His “Cool” Goes Viral On Internet !! SHOCKING !!
Next articleRemember This Pretty Actress From “Kaadhalar Dhinam” ? She Is Suffering From This “Deadly Disease” !! SHOCKING !!

Dr. K. Vijayakarthikeyan who is currently serving as the secretary of Tamil Nadu State Human Rights Commission, made Bakrid wishes to his followers and...

Former AIADMK councillor C Jayagopal has been booked after an illegal hoarding claimed the life of a 23-year-old techie in Chennai on Thursday. Acting on...