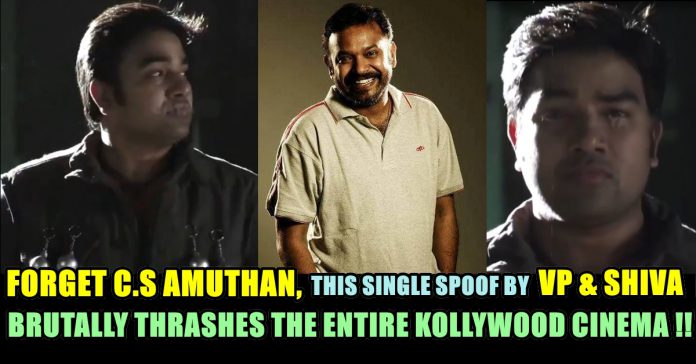 Shiva and CS Amudhan’s Tamizh Padam 2 finally hit theatres this Thursday and it is receiving a very warm welcome from the fans. Last month the makers released a 40-second teaser that made us ROFL. In the teaser of Tamizh Padam 2, the makers trolled several politicians and big wigs of Tamil cinema. Right from Rajinikanth to Ajith, the makers did not spare anyone. In the film, there are references of Tamil films like Vijay Sethupathi’s Vikram Vedha, Ajith’s Vivegam and Mankatha and Vijay’s Mersal and Thuppaki and Rajinikanth’s Kabali. Twitter is cracking up with the way the makers have trolled Kabali and Vivegam in this one.

The trailer and teasers suggest that this time, the film has not spared politicians either. From films of Superstar Rajinikanth to Sivakarthikeyan’s Remo, the film takes a dig at everything that’s popular in Tamil Nadu.
[wp_ad_camp_1]
Starring Siva, Disha Pandey, Iswarya Menon and Sathish, Tamizh Padam 2 is produced by S Sashikanth of Y NOT Studios, which also bankrolled the hit film Vikram Vedha. Apart from movies that acted as prey for this “parody” there are lot of “political” moments that are brutally trolled.
The prequel of this movie is itself a blockbuster which was released back in 2010. The director C.S Amudhan is praised by each and every audience as he is trolling the rival of their favourite hero and for trolling the blunt scenes of Kollywood cinema. The Hero, actor Shiva is no one but the very best friend of director Venkat prabhu. Venkat Prabhu is the one who launched Shiva’s career as an actor through the film Chennai 600028. Apart from we can see Shiva in Venkat Prabhu’s several films such as Saroja, Chennai 28-2 and now in his current film Party as well. As we all praising the spoof film scenes which are taking place in this Tamizh Padam 2, Venkat Prabhu done it back in 2013 with the same “parody” hero Shiva in 100 Years of Indian Cinema function.
[wp_ad_camp_1]
Check out the Video here :

For this overwhelmed Venkat Prabhu got super excited and commented in this video. Check out his comment here :

Hehehehehehe thanks for the share bro!!! Therila bro!! Pannuvom one day

What do you think on this hilarious “parody” video ??

Previous articleGirl Arrested For Having Thousands Of Followers On Instagram !! SHOCKING !!
Next articleThese Rare Posters Of Tamizh Padam-1 Will Make Us Go ROFL !! Just Hilarious !!

As schools reopened in Karnataka, a number of videos of school students being forced to remove their hijab by teachers at the gate are...