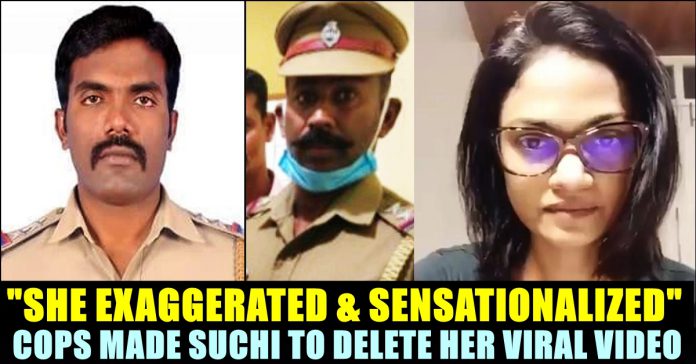 Actress Priyanka Chopra who is currently working in Hollywood film industry, shared the video uploaded by Tamil singer and radio jockey Suchithra about the Sathankulam lockup murder issue to create awareness. She is having 26 lakh followers in the micro blogging social media site. Followed by her many other actors and actresses including Rakul Preet shared Suchithra’s video to express their opinions. Now all of their activities regarding the issue vanished as Suchithra deleted her viral video after Tamil nadu cops asked her to do so.

The press note released by the CB CID, alleged that Suchithra’s narration of the incident is “baseless and is not truly indicative of the real happenings”. They also added that she falsely exaggerated and sensationalized the chain of events. “Her allegations seems to be a figment of imagination and is not backed up by any proof.” read the press release.

They also blamed Suchi for creating hatred against police. “Investigation into the case does not find any substance in the allegation. The video is promoting hatred against the police” the press note said. The division branch of honourable high court of Madras appealed to print, visual and social media not to misinterpret or mislead the proceedings and observations of the court. The bench also further appealed them not to conduct media trials as that would affect the prosecution as well as the accused. The general public is requested not to believe or share such videos” the note further said.

Suchi who compared the Thoothukudi Father and Son duo death with United states George Floyd’s demise, seeked nationwide attention through her video and received the response she expected. Responding to this demand of TN cops, Suchi who is very much active in social media platforms, deleted her video on 9th of July and wrote “Forget the video – it’s job is done. Just watch what happens in this case from here on. That’s more important. #justiceforjayarajandfenix“ in her recent tweet.

Forget the video – it’s job is done. Just watch what happens in this case from here on. That’s more important. #justiceforjayarajandfenix

It is widely believed that the Police officers of Sathankulam tortured them with lathis and beaten them black and blue after stripping their clothes off under Inspector Sridhar’s supervision. Fenix’s elder sister Perisis, after seeing the bodies on the night June 24, has said “Munnadiyum Pinnadiyum onnume illa” (There was nothing left on the front and rear of the bodies) to the reporters in Tuticorin. Head constable Revathy who was present on the night of June 19 came front as the only Police official to sign her witness statement that too after the magistrates assured her protection.

The post mortem report of the case has not been provided by the CB-CID to the media yet but their demand on Suchithra deleting her video has raised the eyebrows of the public.

In a first of its kind moment, A Man married to a transwoman for the legally in Madras high court yesterday. This incident creating...