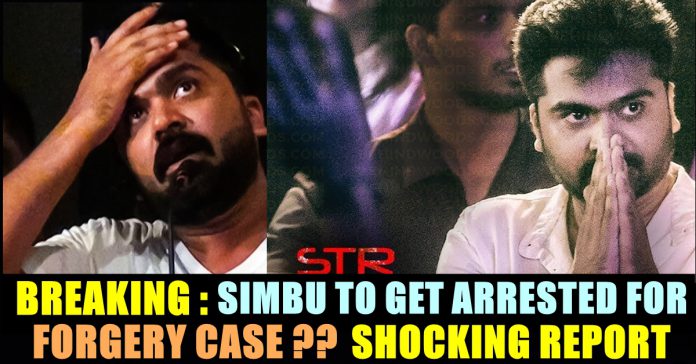 The actor who was last seen in “Vantha Raajava Thaan Varuven” by Sundar C as protagonist and has attended shoot of the 50th movie of Hansika, his former girlfriend. There were shooting spot pictures of Simbu with gautham Karthik were also released which is a movie produced by Gnanavel Raja. It was said to be a remake of Kannada remake “Mufti”.

Now, Gnanavel Raja who couldn’t reach Simbu for his “Mufti” rmeake, got irked and decided to make legal action against him. Now the reports are saying that along with Gnanavel Raja, “Manadu” producer Suresh Kamatchi, Vinnai Thaandi Varuvaya 2 producer Vijay Raghavendra, Screen scene owner Boomi Builder has filed a complaint against Simbu in producers council. They also lodged a forgery case in Chennai Commissioner office against the actor. It was reported that Simbu got advance from all these producers by promising them to do a movie.

The producers requested the Police to block the passport of Simbu which would make him to reach India automatically. Police officers are yet to make an action against him says reports.

“It was Simbu who called me and asked me to produce a film with him. When the shooting was supposed to go on floors on January, Simbu said that he would visit London to reduce weight. When he comes back, we planned restart the project. Almost 6 crores invested in the advance payments for locations and other aspects.” said Suresh kamatchi in an interview while talking about Simbu’s approach of Manadu film.

“Simbu said that many people are disturbing the project. He worried about the rumours getting surfaced in media.I said that we can prove them wrong by completing the project. Then after a moment, Simbu asked me to announce that he is no more in the project. Only because of his insistence, I made the announcement” he added in the interview.

Previous articleBigg Boss Abhirami Posted Pictures Of Her New Photoshoot !! Check This Reply Of Her To This Guy!!
Next articleWoman Complained About A Lady Selling Fish In Train By Posting Her Picture !! Got Thrashed !!

After the meeting with the committee of health experts and the members of the legislature of 13 other political parties which includes the members...