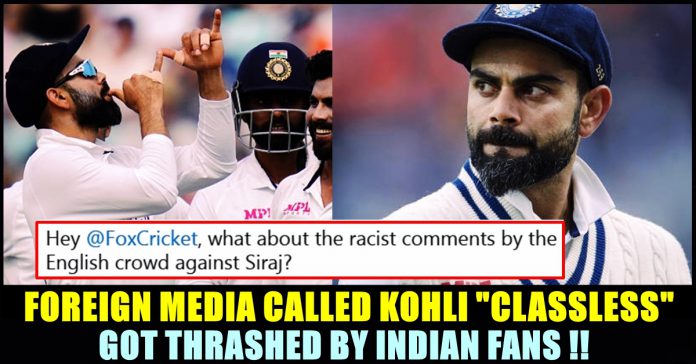 Fox cricket, an Australia based cricket website made a news terming Virat Kohli as “Classless” after seeing his reply to England fans after winning the match. The headline created outrage among the fans of Indian cricket which is evident through the reactions that are surfacing for the news article. Compiling the tweets of Journalist Lawrence Booth and Ex-England Opener Nick Crompton, the website also added a number of tweets of fans.

Kohli led team India won the fourth test match against England at “The Oval” and registered history. With each passing wicket on the final day, Kohli turned to the crowd and mocked “Barmy Army” while celebrating India’s success. The aggressive cricketer gestured “Trumpet” to troll the fans who were using one during the lunch.

Tricky period after lunch but as always still backing the team 💪#ENGvIND pic.twitter.com/UYcGWLQKpF

After winning the match, while other team players were celebrating the victory, Kohli took time to mock the Barmy Army of Team England and the video went viral in social media platforms.

Kohli is one of the greatest test captain ever, domination at home, winning & fighting at overseas. Our captain, our pride, VIRAT KOHLI.♥️pic.twitter.com/xNeAQZviD8

“I don’t really love this. I find it weird when a top-class sportsman isn’t content with winning a game, having totally outplayed the opposition, but wants to stick it to the fans too.” wrote a journalist named Lawrence Booth. Replying to the post, Nick Crompton said “Yea it doesn’t look good for him! No need” through his tweet.

Yea it doesn’t look good for him! No need

Compiling the tweets, Fox cricket made a piece saying that Kohli is “Classless” which made many fans of team India upset. “Captain Courageous: World applauds as Virat Kohli’s team brings dead game to life and scripts historic win. Here fixed it for you” said Wasim Jaffer, former England opener while reacting to the headlines.

“Yeah this is class right…This is video of Anderson shredding ashwin photo after mankading incident” a twitter user asked by uploading the video of Anderson shredding Ashwin’s picture after mankading incident. “Hey @FoxCricket, what about the racist comments by the English crowd against Siraj? Or the corks thrown at KL Rahul on-field? How classy was that?” asked another Twitter user.

Yeah this is class right…This is video of Anderson shredding ashwin photo after mankading incident pic.twitter.com/ik6m15LyuC

Hey @FoxCricket, what about the racist comments by the English crowd against Siraj?

Or the corks thrown at KL Rahul on-field?

How classy was that?

classless? i remember a certain english team urinating on the Oval turf after their Ashes win,what would you call that,nothing wrong with what Kohli's done,he's a passionate fellow,if you can't tolerate that,that's too bad

You know Virat thrives on such negativity and hatred. The more you throw such stuff at him the more it motivates him and his team to perform better.

So, as an Indian fan, I really love it when people instigate Virat. Keep it coming.😃😃

Australia really need to play some actual cricket for you to report on….

Too Much Class Here , Right ? pic.twitter.com/2kG3DKs13Q