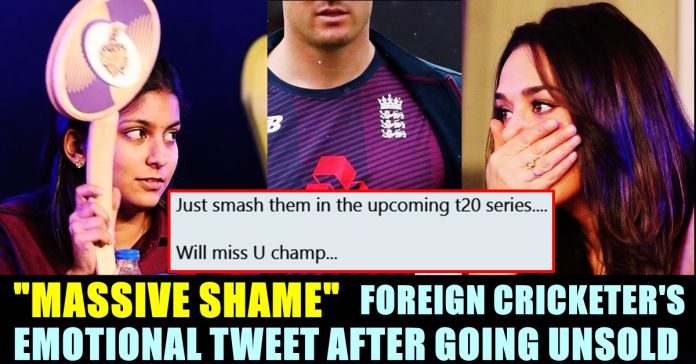 The most awaited IPL auction took place at Chennai on Thursday with the participation of eight teams. Chris Morris and Glenn Maxwell went for the highest price with several notable foreign players going unsold. Jason Roy, significant English batsman who was born in South Africa uploaded an emotional tweet expressing his regret over not getting sold for the cash rich Twenty 20 tournament.

About 1114 players had registered themselves for the auction of Indian
Premiere League. Only 292 players have been shortlisted by the BCCI after the franchises sent their preferred lists to the board. So far Chris Morris and Glenn Maxwell has been sold for highest prices. Rajasthan Royals paid Rs. 16.25 for Chris Morris whereas Maxwell was bought for Rs. 14. 25 crore by Royal Challengers Bangalore.

Along with some of the big names such as Alex Hales, Aaron Finch, Jason Roy, one of the most proficient English players also went unsold despite of having a decent Big Bash league. None of the eight teams showed interest in the 30 years old.

Reacting to this, the cricketer came up with a tweet saying that it is a massive shame not to be a part of Indian Premiere League. However, he congratulated the cricketers who got selected and said that the tournamnet is going to be a good watch.

“Massive shame not to be involved in the @IPL this year but wanted to congratulate all the lads that did get picked up. Especially some of the high rollers. Going to be good to watch” read the tweet of the cricketer whose tweet garnered huge reception from the cricket fans of India.

Massive shame not to be involved in the @IPL this year but wanted to congratulate all the lads that did get picked up. Especially some of the high rollers. Going to be good to watch 👊🏼

Unlike his other tweets, this one garnered 36 K reactions with enormous number of comments consoling him. “Boss, don’t put down yourself. If you have luck, surely you’ll sneak into any team as a replacement. Wait and watch.” wrote a follower in a way of stretching his supportive hand whereas another one said “Hard luck Jason! Let the mega auction arrive & I’m sure you’ll definitely be a part of some franchise..”

This world loves and backs garbages 🗑 rather than gems like u Roy. Guess wht the indians dont know how Jason Roy alongside bairstow was the 70% why England won the world cup.

Hard luck Jason! Let the mega auction arrive & I’m sure you’ll definitely be a part of some franchise..

No shame mate.
Getting involved in IPL is not everything.

Just smash them in the upcoming t20 series….

Will miss U champ…

Previous articlePujara’s Emotional Tweet After Getting Picked By CSK !!
Next articleActor Vivekh Got Upset On Seeing This Sivakarthikeyan Poster !!

A video that shows dance choreographer Robert forcing actress Rachitha Mahalakshmi to kiss him even after she says that he is like a brother...