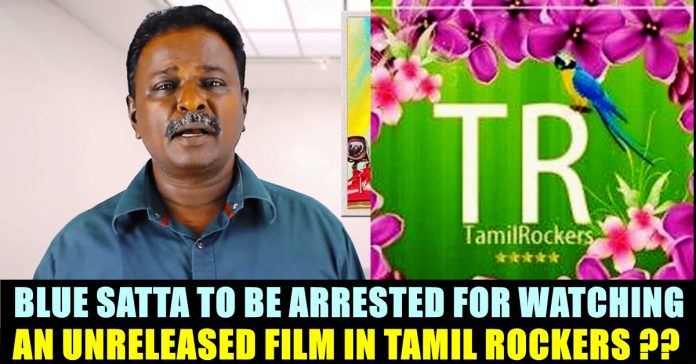 For reviewing Christopher Nolan’s “Tenet” after watching it in piracy, Blue satta Maaran facing the wrath of Internet users. Due to the COVID 19 outbreak, almost all the countries in the world haven’t watched a film in theatre in 5 long months. To prevent the spread of the deadly disease which killed 2 crore and 50 lakh people across the world, governments have decided to shut down public places such as parks, malls, theatres and other places which are meant for entertainment purpose. However, few countries including USA and China are slowly opening the theatres in their country with limited number of visitors and with precautionary measurements.

Delayed three times due to the COVID-19 pandemic, Tenet premiered in the United Kingdom on August 26, 2020, and is scheduled to be released in the United States on September 3, 2020, in IMAX, 35 mm, and 70 mm. It is also getting released in the theatres of China. However, the film is already being streamed in illegal piracy websites such as Tamilrockers etc.

Now, Blue satta Maaran, one of the leading Tamil movie reviewers with 1 million plus subscribers have watched the movie, most probably in Tamil rockers and reviewed the film “Tenet”. In his 4 minute long review, Maaran revealed the plot of the film and criticized the acting of John David Washington, son of Denzel Washington. Maaran said that this film has nothing impressive like the other films of the filmmaker.

“Chasing scenes are very slow and the making is bad as well.” the film reviewer said. He also criticized Robert Pattinson by saying that he is doing the same thing he did in “Twilight” series as vampire. “The film is going to get released in 70 countries across the world. In USA, the most affected country is also releasing the movie from 3rd of September. But we are still hesitating to open the theatres” Maaran blamed TN government.

Maaran also attempted a skit to reveal how he watched the film at the end of the review. He said that it is “Thozhil Ragasiyam” (Business secret) and referred a popular dialogue in “Nayakan” movie. “There is nothing wrong in doing something which benefits at least 4 people” the reviewer said.

As soon as the review video released, his followers wondered how he managed to watch the film as it has not released in India yet. Some of them rightly predicted and trolled him as well. However, a twitter user went one step ahead and reported Maaran’s video to “Warner Bros”, producers of “Tenet”. One of a user even demanded an arrest against Maaran for illegally watching the film.

“How can you review #Tenet for your 1 million plus followers off a Pirated copy? This is illegal and Maran has to be arrested” he said in his tweet.

How can you review #Tenet for your 1 million plus followers off a Pirated copy? This is illegal and @tamiltalkies Maran has to be arrested @wbpictures @warnerbrosindia https://t.co/GQFYrMBoiX

This self proclaimed "Reviewer" has been disrespecting Filmmakers for a long long time. Freedom of Speech … I guess. But now there is proof that he has done something illegal! @wbpictures @warnerbrosindia @warnerbros

Just now I reported about this video to @warnerbrosindia ✌

It is notable that Maaran is going to become a filmmaker soon. He has made a film under “Manadu” producer Suresh Kamatchi’s banner and the post production is on. The film is expected to release post lockdown and his followers are eagerly waiting for it to see the man’s directorial skills. The film Maaran made is based on a true incident, reports suggested.

Comment your views on the upcoming filmmaker watching a movie in piracy to review it to his 10 lakh followers !!