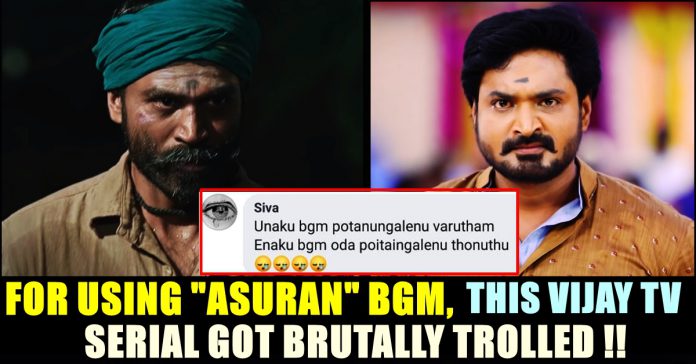 The latest movie of Danush-Vettri Maaran collaboration, exceeded the expectation of the fans of Tamil cinema. Beyond Danush fans, the film is being appreciated by fans of all the actors for its intense content and the for the way the actors performed in it. Starring skilled actors such as Danush, Manju Varrier, Prakash raj and Pasupathi, the film also gave opportunities to newcomers such as Teejay, Ken Karunas, Abhirami.

Apart from the acting, story line and direction, music of the film also highly appreciated. Music composer G.V Prakash who collaborated with G.V Prakash in his previous ventures, impressed the audience with his Background music and songs. As fans are attached with the music of the film very much, they couldn’t tolerate when it is being misused it seems.

The satellite rights of Asuran was bought by Vijay Television which is known for telecasting serials as well. (Also Read : Vijay Television Bought The Satellite Rights Of “ASURAN” ) For a promo of the serial Naam Iruvar Namaku Iruvar, the television authorities decided to use the background score of Asuran to make it look interesting. Check out the promo here :

What do you think on these reactions received by “Naam Iruvar Namakku Iruvar” for using Asuran BGM ?? Comment your views below !!

Previous articleTop Actor Slammed Chief Minister For This Reason !!
Next articleNot Keerthy Suresh But These Heroines To Pair With Rajinikanth ??

This Indian Village Does Not Allow Girls To Go To School Because Of This Reason !! SHAME !!

Even today, menstruating girls are not just forbidden from the kitchens and the temples, but are being forced to skip schools. According to a...

“Behave According To Your Age”- Follower’s Harsh Comment Made Anikha To Reply !!

Anikha Surendran, 15 year old child artist who is known among Tamil audience for her appearance in films like "Viswasam", "Ennai Arinthaal", " Naanum...