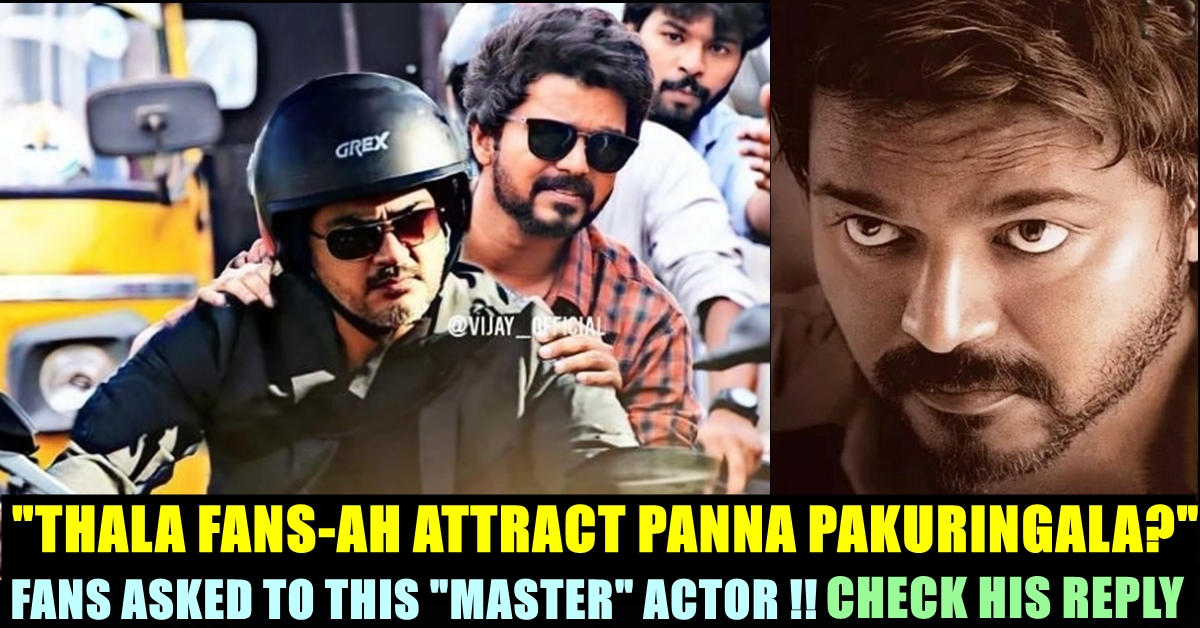 Dheena who acted in “Master” as one of juveniles, gained appreciations from fans for doing his part well in the Vijay-starrer. He who is pretty much active in social media platforms, recently came up with an Instagram post expressing his wish of seeing Vijay and Ajith in one frame. However, a follower of him said that he is trying to gain fame among Ajith fans and Dheena, immediately gave a fitting reply to him, screenshot of which is doing rounds in social media platforms now.

Dheena who played a prominent role in director Lokesh Kanagaraj’s “Kaithi”, got an opportunity to act in “Master” as well. Dheena played a role of one of the juveniles in the gang led by Arjun Das. He had combination scenes with actor Vijay towards the climax as well. Now, the actor who is pretty much active in social media platforms, came up with a post which consisted a photoshopped picture of Ajith and Vijay travelling in a bike.

Adding the picture in his Instagram, Dheena, through his caption, said that the picture looks ravishing while seeing it as a post and said that it would be deadlier if they both share screen space in a film. “Post a pakumbothey semaya irukey padama vantha epdi irukum..” caption of his post read.

On seeing this post from Dheena, a follower of him asked whether he is trying to attract the fans of actor Ajith. Replying to him Dheena said that he doesn’t need to do that. “It is you neutral fans who are creating a rift between Vijay and Ajith fans by saying that an actor who acts in a Thalapathy film is against Thala” said Dheena by writing “no need for me Thalapathy movie la nadicha thala Ku against neutral fans than rendu peraium pirikiringa”

Earlier, to a fan who mocked Dheena for his limited screen presence in “Master”, the actor replied saying that it took 7 years for him to appear in the film for 7 seconds. He said that it is a big achievement for him in his life. The actor wrote “enaku athuvey periya vishayam brother antha padathula 7 secs varathuku enaku 7yrs achu”. as his reply to the troller.