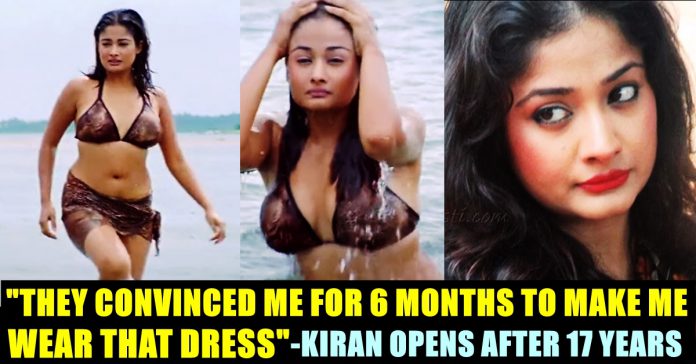 For The First Time Kiran Opens On The Bikini Song In “Winner”After 17 Years !!

Cinema celebrities recollecting about their working experience in social media became common in this digital era. Unlike MeToo movement, through which we came to know about the dark side of the film industry, there are celebrities who would tend to share about their pleasant experiences as well. Actress Kiran Rathore, shared her experience during the “Bikini” song shooting for her blockbuster 2003 film “Winner” where the actress had mixed emotions such has hesitance, disappointment, guilt etc.

Kiran debuted to Tamil film industry through Vikram’s 2001 flick Gemini. In the film she appeared as a Tamil speaking north Indian girl and impressed the Tamil audience in big time. After that, she acted in Ajith Kumar’s Villain and in Kamal Haasan’s “Anbe Sivam”. Within a very short span of time, the actress shot to fame by pairing up with Kollywood’s top actors such as Vikram, Kamal and Ajith.

In 2003, Kiran’s “Winner” directed by Sundar.C released and became a massive hit. The film is still a favourite to many for the comedy sequences performed by actor Vadivelu. Now, after 17 long years, Kiran opened about her experience before the making of “Enthan uyir Thozhi” song which she would have appeared in Bikini.

Kiran, while sharing about the song’s making through her official Instagram account, said that it is her first and last attempt of wearing “Bikini” so far. She revealed that the makers of the film took 6 months to convince her to wear the two piece cloth. However, the actress said that she had lot of questions in her head even after accepting to wear it. “Not because of having an issue wearing it but was quite apprehensive regarding my weight at that time of the shoot” the actress wrote in her post.

Now, the actress regrets for disappointing her fans for giving such shots. Through the post, Kiran gave her word to her 3 lakh 50 thousand followers and the fans outside social media on doing it again with a “perfect summer body”. She added a glimpse of the song’s video while sharing the post.

My first and the last attempt of trying a bikini shot … the makers took 6 months to convince me wearing a two piece ..but still had lot of questions toin in my head while wearing this .. not coz of having an issue wearing it but was quite apprehensive regarding my weight at that time of the shoot… but song and the film became a hit .. and I know I disappointed many fans giving such shots .. but all wells when ends well .. in fact will be doin this again with a more perfect summer body 😜😜😜#winner#tamil#movie#daretobare #thinkoutofthebox

Few of her recent projects in Tamil are “Aambala” and “Muthina Kathirikkai” of Sundar C. She is also one of the top contender to participate in the most awaited Kamal haasan hosting Bigg Boss season 4.

Comment your views on this promise made by the actress to her fans !!

Previous articleSivakarthikeyan Got Extremely Happy On Seeing This Reply From His Favourite Actor !!
Next articleSamyuktha Got Attacked By A Woman In Broad Daylight For Her Workout Clothes !!

Here’s How Internet Is Reacting To The Announcement Made By Our PM !!

Prime Minister Narendra Modi who said that there will be a small video message for his fellow Indians yesterday, made it through a video...