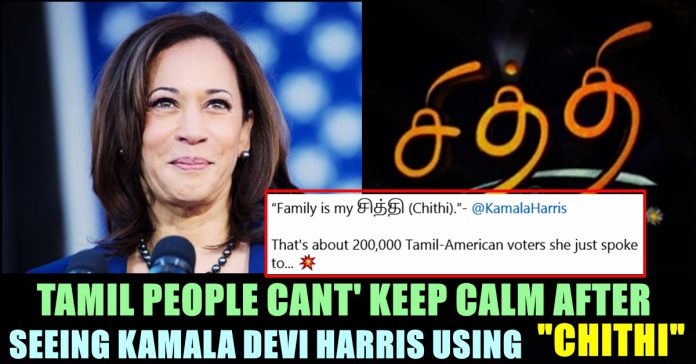 After accepting the Democratic nomination for vice president, Kamala Harris became the first Indian black woman on a major party’s White house ticket. In her Democratic Convention speech, she accused Trump of turning “our strategies into political weapons”. She urged Americans to vote of Joe Biden, “a president who will bring all of us together”. “Donald Trump’s failure in leadership cost us lives and livelihoods” the former California prosecutor charged in her acceptance speech.

However, what grabbed the attention of listeners the most is, the way Kamal used the term “Chithi” in her speech. The Tamil word which means Mother’s younger sister was used by Kamala Harris in her speech only to let Tamil speaking Internet users to get emotional.

Tamil people who were watchung her speech from around the world got surprised as someone spoke Tamil for the first time in the US democratic speech. “Family is my husband Doug, Family is our beautiful children, Cole and Ella, who as you just heard Momala. Family is my sister. Family is my best friend, my nieces and god children. Family is my uncles, aunts and Chithis” Kamala Harris said in the historical occasion.

Watch | "Family is my uncles, my aunts and my chithis," said #KamalaHarris during her vice-presidential acceptance speech at the Democratic National Convention. pic.twitter.com/OV1S8te7JZ

Tamil people across the word including Padma Lakshmi, a familiar Tamil based American who is known for her cookery shows got impressed and expressed their happiness through tweets. “I literally have tears in my eyes.
Kamala Harris just said “chithis” which means auntie. My heart is so full right now” she wrote in her tweet.

Check out some of the reactions in twitter for the speech of Kamala Harris using the word “chithi” :

I literally have tears in my eyes. @KamalaHarris just said “chithis” which means auntie. My heart is so full right now

Wow, I heard "Chithi" during a convention speech in the US. how great is that! #Tamil

Surreal to hear 'Chithi' uttered at a national political convention by a candidate. Big deal for those who know what that means.

Dear Chithi @KamalaHarris proud to have you as our next Vice President!

Every Tamilian signs up to vote

Kamala Harris, You had me on “chitti” (Tamil word for aunt)! 😆Seriously though, why aren’t we voting for her to be president!? https://t.co/z94317Dk3i

The 55 year old Kamala Devi Harris was born in Oakland, California to Donald. J. Harris and Shyamala Gopalan,a breast-cancer scientist who had emigrated from Chennai, India in 1960 to pursue a doctorate in endocrinology at UC Berkeley. Donald J. Harris, is a Stanford University emeritus professor of economics, who emigrated from British Jamaica in 1961 for graduate study in economics at UC Berkeley. As soon as Kamala Harris achieved the immense feat, Tamil speaking social media users has been claiming her identity when Kamala wants herself to be identified as “simply” American.

Madipakkam, Puzhuthivakkam, Pulianthope and KK Nagar are some of the areas that got severely affected due to the water logging that caused by the...

After a fake circular on SRM college demanding girls to have boyfriend mandatorily went viral in social media platforms, the college management has approached...