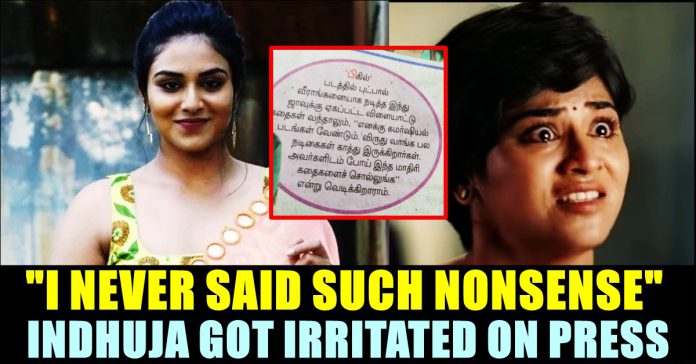 Indhuja Ravichandran, known by her stage name Indhuja, is an actress who appears in Tamil films. Her recent outing Bigil in which she played the role of one of a key football player in Tamilnadu state team, is being widely appreciated by the audience.

The character of “Veambu” she played attracted large number of audience as it had actor Vijay in the lead role. Apart from acting in movies, Indhuja is known for her social media appearance. The photos she shares in her Instagram accounts would go viral as the actress carries an elegant look in the photographs.

It is very well known that media such as print and digital are very much interested in publishing about actresses to grab the attention of young audience. When they go out of news about famous celebrities, we can see them spreading speculations and rumours as truth. Now, a fake news about actress Indhuja was published in a news paper which got the attention of the actress herself.

The bit news says that many filmmakers of sports genre films are approaching Indhuja to do the same as she acted as Football player in Vijay starrer Bigil. Further the news added that the actress is turning down those opportunities to act in a commercial film as there are many other actresses in film industry to do award winning films.

Check out the news that was published here :

Indhuja who saw this news, immediately denied it by saying that she never said anything like that. “Press are someone more powerful &the backbone of cinema I believe.innocent people believe as it is shown or heard.plz don’t write for name sake(respectivepress)am a person who is madly in love with cinema &I would never say such nonsense what you have written.WORDS.HURTS.SOMUCH” read her tweet.

Press are someone more powerful &the backbone of cinema I believe.innocent people believe as it is shown or heard.plz don’t write for name sake(respectivepress)am a person who is madly in love with cinema &I would never say such nonsense what you have written.WORDS.HURTS.SOMUCH pic.twitter.com/JulwkdBbpv

Check out some of the reactions of her followers here :

What do you think on this fake news against Indhuja Ravichandran ?? Comment your views below !!

On Monday, Sivakarhikeyan came up with a tweet in his official Twitter handle recommending the recently released Tamil web series "Vilangu" which had his...