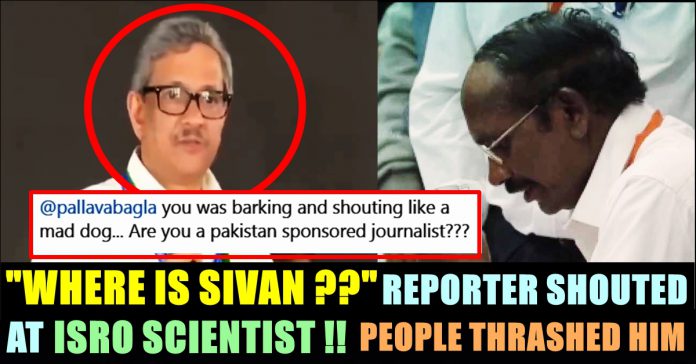 For Shouting At ISRO Official At Press Meet, Reporter Got Thrashed By Public !! MUST CHECK !!

In the early hours of Saturday, Indian space agency ISRO’s plan to soft-land Chandrayaan-2’s Vikram module on the lunar surface did not go as per script. India came 0.0006 per cent close to becoming the first country to do a soft-landing on the lunar south pole. In the early hours of Saturday, as Prime Minister Modi looked on and millions watched nationwide with bated breath, Vikram — named after the father of India’s space programme (Vikram Sarabhai) — went silent just 2.1 kilometres above the lunar surface.

Chandrayaan 2 traveled a distance of 3,83,998 km out of 3,84,000 km between Earth and Moon. However, reports says that all hope is not lost yet. Meanwhile a recent video of a reporter shouting at one of the scientist of ISRO is creating outrage in social media platforms.

The video shows a scientist of ISRO who attended the press meet answering the questions of the reporters. One of a reporter named as Pallava Bagla from NDTV, suddenly shouted at the official by asking why Chairman Sivan has not attended the press meet. He repeatedly kept asking the question to which the senior scientist who is holding the microphone was seen stumbling and struggling to respond to the aggressive behaviour of the scientist.

When such a senior official is addressing press don't know why a third rated sub junior level journalist allowed inside #ndtvwithpakistan#ISRO#Chandrayan2#IndiaOnTheMoon#Chandrayan2landing#ProudIndian#Sivan#Chandrayan#vikramPragyanLandsMoonpic.twitter.com/bVjtNPITM0

As soon as the video surfaced, people in social media started fuming at NDTV for its behaviour towards a senior scientist. They started trending #NDTVwithPakistan in twitter.

That NDTV reporter is a shame on media. He should at least apologize for his way of asking question. Might be frustrated by his wife, no one talks like that to a SCIENTIST. #NDTVWithPakistan#ndtv#Chandrayaan2

How dare you raise your voice on @isro scientist,
u @ndtv joker?

Journalism empowers you to ask question but not crossing the line?

@pallavabagla you was barking and shouting like a mad dog… Are you a pakistan sponsored journalist???#NDTVWithPakistan and official broadcasts right for spreading agenda of pakistan…

Persons like you are similar to ticks…
Parasite and leech…

He's not a politician/criminal whom u can grill with such demeaning tone & call him a "junior".He's a scientist working hard for us rejecting the lucrative offers from abroad. Moreover, #ISRO Chief has better things to do than facing nincompoops like you. pic.twitter.com/tp7ySssD7s

#NDTVWithPakistan
Let us remove the @ndtv channel from our DTH. Unless @PrannoyRoyNDTV asks for apology.

However, Prannoy Roy, the co-founder of NDTV has replied to these allegations by saying that he has apologised and accepted it as rude behaviour. “Pallava has done more for ISRO & India’s science than all the ghastly trolls put together.” he added in the tweet.

I agree. It’s absolutely sick. Yes, Pallava made a mistake, a terrible rude mistake and NDTV has said so. Pallava has apologised – sincerely. He has apologised to NDTV too. That’s it. Pallava has done more for ISRO & India’s science than all the ghastly trolls put together. https://t.co/gr1QkVtZxt