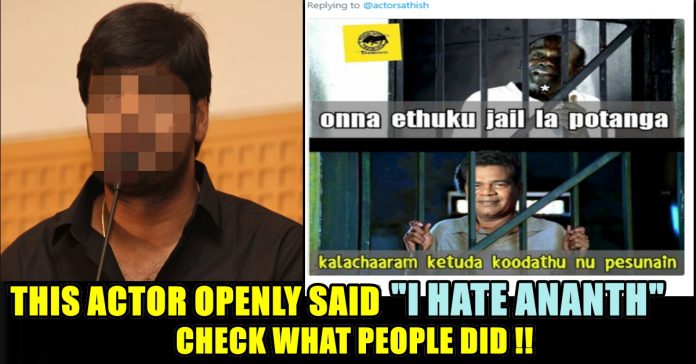 In the third week of Bigg Boss Tamil season two, contestants poured their heart out by sharing their personal stories to show host Kamal Haasan during the weekend episodes. The Friday episode, in particular, witnessed a lot of tears than any other episode of Bigg Boss till date; even the toughest contestants broke down while sharing their narratives.

Before the announcement of eviction, Haasan conducted a few games that brought to light the opinion of inmates on their peers. During one such activity, Ponnambalam spoke about how the behavior of a few contestants (implying Yashika, Aishwarya) is not suitable for audience of all age groups who watch the show. Even Haasan agreed with his views and nodded his head in affirmative. Bigg Boss granted evicted player Ananth the power to lock one of the contestants in the jail for their wrongdoing. Ananth, who differed in opinion with Ponnambalam, chose him to be under solitary confinement. “A woman gives her love to everyone around her and she clearly knows where to draw the line. It’s her right to live her life on her terms,” said Ananth. Kamal extended the episode to address something that needed immediate attention. Advising Yashika, Aishwarya, Mahath and Shariq, Haasan said, “Please make use of the platform which not everyone will get to show your real self to the public. Some of your actions might make the audience detest you. Both Ponnambalam and I suggest this as a father would do. But Ananth sir is not at fault too; he, as a grandfather, would love to pamper his grandchildren. That’s what he did.” Actor/ Comedian Sathish, who is known for films like “Ethir Neechal” commented something about this issue. He is an ardent follower of Bigg Boss who comments on almost every occasions of Bigg boss. He seemed dejected because of the imprisonment of Ponnambalam. He exposed his hatred against Ananth Sir in twitter for sending Ponnambalam into the jail.

He said “I hate Ananth sir #PonnambalamArmy started” which received a large number of audience response. Here Check out some of the main comments :

Actually problem with all 4..mahat, shariq, ishwarya and yashika.. Finally it pointed only the girls.. Mahat is the main culprit 🙅ponambalam Sir you rocked today

I started to hate him since super singer 🤣

What do you think ?? You support Ponnambalam ??

Previous articleGuy Accused Actor Siddharth Is Against BJP To Get Popularity !! See How He Bashed Him !!
Next article“SARKKAR” Controversial First Look Issue Explodes !! Vijay-A.R Murugadoss In Deep Trouble !!

The police today put charges against a man who was killed in an accident for rash and negligent driving in Himachal Pradesh's Chamba district,...