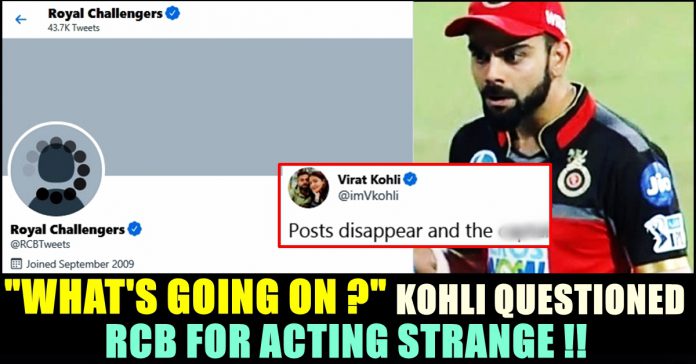 Royal Challengers Bangalore, the IPL franchise with enormous number of fans made the headlines today after its captain’s remark on their twitter handle’s strange activity. The official twitter handle of the popular IPL team is very much known for its witty posts and sarcastic replies to its followers. The team which is being led by the national team captain hasn’t won the title for a single time since the inaugural season of the tournament.

Having more than 36 lakh followers, RCB team also involved in twitter banter. Now the twitter handle which is very much active in the social media platforms throughout the year removed its display picture and the cover picture in Twitter. They did the same in their facebook and Instagram profiles. To our surprise, the twitter handle name also changed from Royal Challengers Bangalore to Royal Challengers and some of their old posts also removed from their account in all the social media platforms.

Having no clue about what is going on, along with fans, captain Virat Kohli who is currently busy in captaining the national team in the New Zealand series posted a tweet questioning the weird activity of his team’s official twitter handle. Through his official twitter account, Kohli asked “Posts disappear and the captain isn’t informed. 😨 @rcbtweets, let me know if you need any help.”

Posts disappear and the captain isn’t informed. 😨 @rcbtweets, let me know if you need any help.

One of a prominent spin bowler of the team, Yuzvendra Chahal also questioned regarding the activity of his team. He wrote “Arey RCB, what googly is this? 🤔 Where did your profile pic and Instagram posts go? 😳”

Arey @rcbtweets, what googly is this? 🤔 Where did your profile pic and Instagram posts go? 😳

According to NDTV, these activities of the RCB twitter account took place after a day the Bangalore based franchise signed a new title sponsor for IPL 2020. The team’s official twitter handle, few minutes ago posted a tweet, in a way of replying to the questions shot by the cricketers.

“Sit tight. Be right back.” caption of their post read in which we can see pictures of the symbol “Loading” shown. Their Twitter display picture also showed the same.

Sit tight. Be right back. pic.twitter.com/kG5ul3wPkF

What do you think on these activities of RCB’s twitter handle and the reactions from its cricketers for it ?? Comment your views below !!