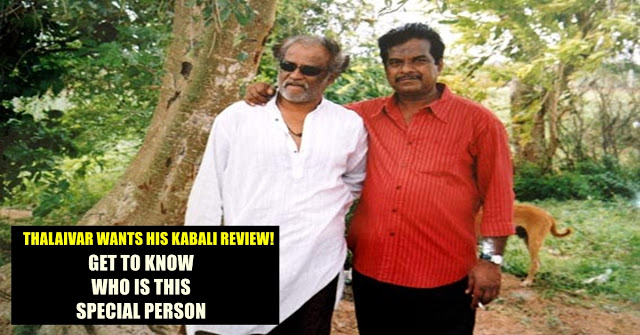 For Rajnikanth, It Is Very Important To Get Kabali’s Review From This Person! Yes, He Is A Special Person In His Life

The whole of India has been gripped by the ‘Kabali’ fever. Yes, Rajnikanth fans have gone crazy since the release of the movie and are trying all possible ways to secure a ticket. In southern states of India, theaters are housefull and there is no ticket available till Monday. If you go outside a cinema hall, you would wonder if there is any sort of festival going on; yes, such is the power of Rajnikant.

Amidst all this craze, Rajnikanth is waiting for a review of ‘Kabali’ from someone special in his life. Yes, his best buddy, a 71 year old bus drive holds a special position in his life. Rajnikanth doesn’t care about anyone else’s feedback, but this driver’s feedback is of utmost importance to him.
Named P Raj Bahadur, he was the driver of the same bus 10A in which Rajnikanth was the conductor. They were together for almost 3 years.

There is a trend which is going on since years between these friends; every time Rajnikanth’s movie releases, it is Bahadur’s duty to call him up and give his genuine review. Moreover, it is compulsory for Bahadur to watch it on the 1st day itself.
Understanding Bahadur’s importance in Rajni’s life, all owners of cinema halls want him to watch in their theater. Bahadur says “The owners tell me if I watch it in their theatre, they get a feel that Rajini is watching it there.”
This is a perfect example of Rajnikanth’s modesty. Even after he attained heights of success, he treats Bahadur with equal respect. Many of you must not be aware that Rajnikanth had financial problems when took a break in 1970s and it was Bahadur who helped him. Yes, still Rajnikanth feels he is obliged to his friend and indebted for it.

Talking about this special bond, Bahadur says “Back then, Rajinikanth was not that well-off and I helped him study the two-year course. He was then spotted by K Balachander and was cast in ‘Apoorva Ragangal’. His career took off instantly from there.”
He further adds “He had the talent and made it big. I wanted him to become a star and I am happy beyond words that he made it. Even in my dreams, I never thought he would become such a big star,”
Moreover, many times Rajnikanth offered job to Bahadur, but the latter refused to accept because he didn’t want to affect the pure friendship they share.
Talking about Rajnikanth’s simplicity, he says “We still address each other in singular (the word ‘da’ in Tamil). Whenever he visits Bengaluru, he asks me to come to the airport and he comes to my house in Chamarajpet and stays with me or we both go to his house near Golf Grounds.”
So guys what do you have to say about the modesty of Rajnikanth? Do let us know your comments in our comments section below.
News Source
Previous articleMeet The Chennai Model Who Risked His Life To Save A Girl From Getting Gangraped! HATSOFF
Next article12 Most Happening Pubs In Chennai, You Should Visit Atleast Once For Saturday Night Party!

A number of fans criticized the makers of Bigg Boss for not telecasting singer Chinna Ponnu attempting 1 minute long plank in front of...