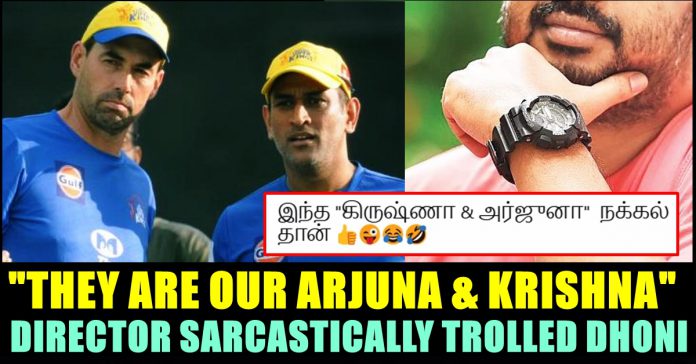 As all the other teams CSK also participated in the IPL auction and bought Piyush Chawla, Sam Curran, Sam Curran and Josh Hazlewood on their behalf. Very own fans of Chennai Super Kings are not happy with the decision took by the franchise in the bid that took place on 19th of December. They bought leg spinner Piyush Chawla for a whopping price of 6.5 crores rupees. Many fans couldn’t find the reason behind the purchase as the team already has three spinners Harbhajan Singh, Imran Tahir, Karan Sharma along with batting allrounder Suresh Raina.

However, fans not convinced and are making fun with the decision made by the team management. Meanwhile popular Kollywood filmmaker and ardent cricket fan C.S Amudhan has made a press release sort of announcement through his official twitter account.

The man who is known for making spoof films, conveyed a sarcastic message to troll the yellow franchise. The filmmaker said that Chennai Super Kings didn’t buy any young or emerging foreign players because they didn’t want any of them to use their experience gained in IPL against team India.

“It is as simple as that” he said in his statement. “Any player picked for CSK will go on to realise their full potential and become champion cricketers like Jadeja. Chahar, Rayudu etc” his statement said. “Dhoni and CSK do not want this incredible advantage to be passed on to young foreign players” the statement of Amudhan added.

The director also added that there is no realistic expectation for Josh Hazlewood to return to the squad of Australia. Towards the end of his conversation, Amudhan said that Dhoni and Fleming are Krishna and Arjuna respectively.

Right way of thinking hats off to you https://t.co/fsTdYMxbDA

What do you think on this perspective of Amudhan ?? Comment your views below !!

10 Places In Chennai Where You Get The Best Juicy Burger For Less Than Rs.500 For Your Gang!!

One of the cheesiest inventions of amazing food, BURGERS top the list for most of us. Just seeing all the cheese oozing out, the meat...

“I Can’t Believe You” Popular Film Producer On Prashanth’s Accusation Against DMK !!

After seeing the accusation of movie reviewer Prashanth against the DMK party, popular movie producer Dhananjayan who is known for producing films such as...

Yashika’s Fitting Response To Those Who Edited Her Picture In A Creepy Way !!

Young and emerging actress Yashika responded to the creepy edit that were made against her using a recent story she uploaded of herself. In...