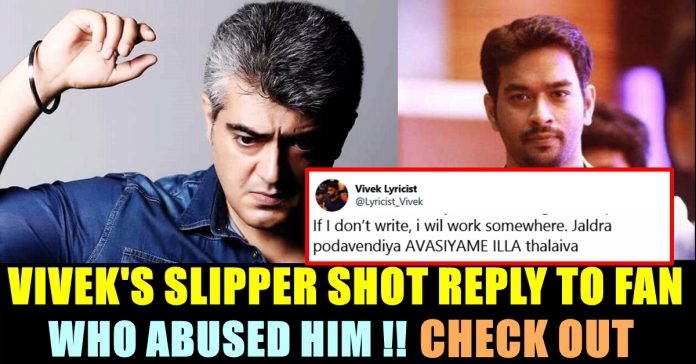 Lyricist Vivek whose recent song “Verithanam” from Bigil is trending, is very much active in writing songs for Tamil films. The busy lyricist is very much attached to his followers in micro blogging social media site where he interacts with them often.

Vivek also involved in uniting the fans of actor Vijay and Ajith in certain occasions as he wants the youngsters to avoid the Twitter war which is a waste of time. Lyricist Vivek Trying To Unite Vijay, Ajith Fans !! This Will Melt Your Heart For Sure !!

Yesterday, Bollywood Badshah Shah Rukh Khan conducted a chat session with his fans in Twitter. Many questions from the south Indian cinema fans were also shot to the King Khan. When one of a fan from Tamilnadu asked the Bollywood Superstar to share his thoughts about Ajith, Shah Rukh said that Ajith is his friend.

On seeing Shah Rukh Khan’s reply, Lyricist Vivek who couldn’t keep his emotions in check, let it out by sharing this tweet with a heart emoji.

To this tweet of Vivek, a twitter user named as BIGIL, disrespected the Lyricist and said that he couldn’t bear seeing Vivek taking both the sides.

This comment from the fan grabbed attention of Vivek who immediately replied back by saying that he is very much busy in his work and doesn’t need to take sides to survive. “I felt proud on seeing a famous artist like Shah Rukh to talk about an actor from my place.” he further added.

“To U n those who think like U..I cant help it. I have written nearly 15 to 17 songs in the past 10 days. If I don’t write, i wil work somewhere. Jaldra podavendiya AVASIYAME ILLA thalaiva. Oru periya kalaignan..NAMMA OORU actors pathi pesumbodhu perumaya iruku. Share pannen. Dot.” Vivek said in his tweet.

To U n those who think like U..I cant help it

I have written nearly 15 to 17 songs in the past 10 days. If I don’t write, i wil work somewhere. Jaldra podavendiya AVASIYAME ILLA thalaiva

However, many vijay fans apologized to Vivek by saying that he doesn’t represent every Vijay fan. They also asked him to ignore negativity. Check out some of their replies below :

Previous articleHardik Pandya Trolled Zaheer Khan On His Birthday !! Here’s How The Veteran Gave Him Back !!
Next article“BIGG BOSS SEASON 1 Is The Best” Says This Actress !! Check Out The Reason She States !!

Best known for the American reality TV series, Kailia Posey who was just 16 years old, died by suicide in Washington, according to a...