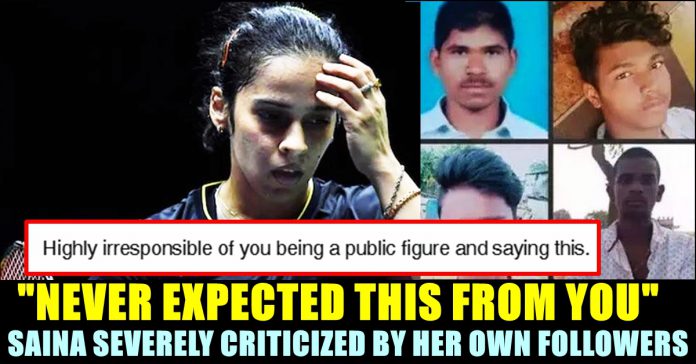 The entire country divided on the decision made by the police officers of Telangana. When one set of people are celebrating the act, the other set of people are completely took a stand against it by saying that the punishment for the culprits should be issued by court and law, not by policemen.

In a massive twist in the development of the rape and murder case of Hyderabad Veterinary doctor Priyanka Reddy, Police officers have shot the four criminals alleging that they tried to escape while they accompanied the criminals to the scene where the crime happened to reconstruct it. It was reported that two policemen have injured.

According to The News Minute, DCP Prakash Reddy who was at the scene said that the accused tried to escape by taking the guns of the policemen. “When they attempted to escape, the were shot dead” said the officer. The incident happened between 6 and 6 30 in the morning.

As many celebrities are welcoming the act, Saina Nehwal, a champion player in Badminton game, also welcomed the decision of Telangana Police officers. In her tweet, she wrote “Great work #hyderabadpolice ..we salute u 🙏”

Great work #hyderabadpolice ..we salute u 🙏

To our shock, many of her followers who saw this tweet from Saina started criticizing her for supporting the act. One of them said that he never expected such tweet from an influential personality like her. “Don’t say this. India is a law abiding country. Or should be. The police need to follow the law” wrote the other one which sparked debate. Check out some of their reactions here :

Don’t say this. India is a law abiding country. Or should be. The police need to follow the law

Highly irresponsible of you being a public figure and saying this.

I strongly condemn rapes but sometimes police frame innocent / petty criminals to get rid of unbearable pressure on them so I do not support such encounters. There is every liklhood of misuse of such powers , in future #hyderabadpolice

No Saina.. not expected from you.. what if government wants your family to be eradicated for some foul plan of theirs.. Atleast educated people should be in favour of better judiciary system and fast track courts for such grave cases

Very irresponsible tweet from a public figure. This is endorsement to jungle justice. One set of criminals being eliminated by another set. Sad

R u sure??? If Indian icons thinks like this, what cud be expected from normal citizens?? Horrible

What do you think on these reactions received by Saina ?? Comment your views below !!

Previous articleThese Celebrities Reacted To The Decision Of Telangana Police !!
Next articleFor Not Posting “RIP” To The Victim, Public Questioned Samantha !!

Final Message Of J Anbazhagan To The People Of TN !! WATCH

A recent interaction J Anbazhagan had with a media portal about creating awareness for COVID 19 is doing rounds in social media platforms now....

Pujara Faced The Highest Number Of Balls In This Series Compared To Both Teams !! This Leading Actor Can’t Resist From Praising Him !!

History beckons for Team India in Sydney and the visitors certainly batted like they are chasing it on a beautiful day at the SCG....