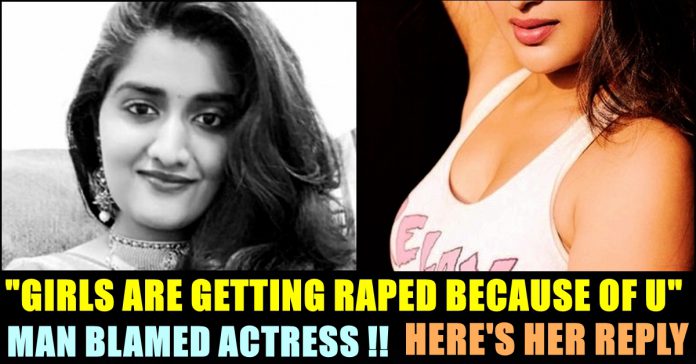 In an attempt of discovering the reason behind the tragical murders of women in India that took place in last few hours, many people are blaming several things including the government,politicians and the dangerous atmosphere of our country. To our shock, few even blaming the victims and their families for not being precautionary.

Now to our shock, one of a social media user blamed an actress for posing with brassiere in her own Twitter account. Actress Nidhi Agarwal who is popular in Bollywood is making her Kollywood debut through actor Jayam Ravi’s upcoming film “Bhoomi”. The actress who enjoys more than 2 lakh followers in Twitter is very much active in updating the pictures of her photoshoots.

Recently she uploaded a picture of herself with a caption saying “r e l a x”. In the picture we can see Nidhi Agarwal posing in the sunlight with brassiere which says “Relax”.

On seeing this post of the actress, one of a twitter user named as Naresh blamed the actress for the rapes that are taking place in the society. He asked actress not to post such photos in social media. “By u people only ….common ladies got raped outside ….plz maintain ….don’t show ur hot looks to social media…..u r looks remain for only movies” read the comment of the social media user.

By u people only ….common ladies got raped outside ….plz maintain ….don’t show ur hot looks to social media…..u r looks remain for only movies

Nidhi Agarwal who noticed this tweet from Naresh decided to reply to him immediately. The actress asked his address to send the movie “Pink” which carries a message against men who thinks that they can touch a girl without her consent.

“Appalled at the catastrophic thinking of this individual. Naresh please send me your address, will send you this movie called Pink. You need it.” read the reply of Nidhi Agarwal.

Appalled at the catastrophic thinking of this individual. Naresh please send me your address, will send you this movie called Pink. You need it. https://t.co/bmKNdDg0zi

Within 24 hours of time span, India faced shattering cases of rape and murder in both Tamilnadu and Hyderabad. Priyanka Reddy, A twenty six year old doctor who went missing since wednesday found dead at Shadnagar. This news indeed shook the entire country as many citizens raised voice against the culprits.

Next day of her missing, Priyanka’s body was charred beyond recognition in a devastated way and the family abled to identify Priyanka only through the Ganesh locket she was wearing. Nidhi Agarwal who faced the blame from the Netizen for posting picture with less clothes, reacted to the news and voiced against the criminals at the time of the news surfaced.

This has saddened me to my core. Human being inhumane. This needs to stop. This is what we know of, imagine how many cases we don’t know about. Women or men, every individual needs to be treated with basic respect. These men deserved to be punished. #JusticeForPriyankaReddy

It is high time for people like Naresh to change their mindset and concentrate on things such as good parenting and educating sex to male children which could actually change the atmosphere of our country in future.

What do you think on the reply of Naresh ?? Comment your views below !!