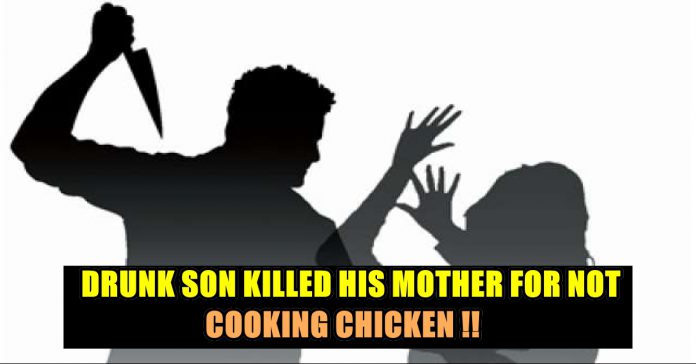 For Not Cooking Chicken , This Man Stabbed His Own Mother To Death !! : Outrageous !!

A registered medical practitioner (RMP) stabbed his 80-year old mother at Badepuram village of Tadikonda mandal in Guntur district on Sunday after she refused to cook chicken curry.

According to Mangalagiri rural police, the accused, Bejjam Kishore, 45, an RMP in the village, came to his mother Bejjam Mariyamma with chicken meat and asked her to cook it for him. The old woman asked him to bring some rice as there was not enough in the house for everyone. Kishore, who was reportedly in an inebriated condition, refused her  request and insisted she cook chicken first.
Irritated by his behaviour, Mariyamma refused to cook chicken and started scolding him for his attitude. Incensed by her mother’s rebuff, Kishore stabbed her with a kitchen knife. She died on the spot. Her relatives and neighbours, who rushed to the spot found the old woman in a pool of blood.
They overpowered Kishore and alerted police, who rushed to the spot and took him into custody.
[wp_ad_camp_1]
The body was shifted to government hospital for autopsy. Police who registered a case against Kishore said he is elder of the two sons of Mariyamma and has been living separately since he got married. Crime in a drunk state Incensed by her mother’s refusal to cook chicken, Kishore stabbed her with a kitchen knife. Relatives found Mariyamma in a pool of blood. Kishore was reportedly in an inebirated state.
Previous articleEXCLUSIVE : Kamal Haasan “Laughs Out Loud” On Seeing The Bigg Boss-2 Contestants !! : HILARIOUS !!
Next articleGautham Menon Saved Vikram From Saamy-2 Trailer & Fans Brutally Trolled GVM For This Reason !!

Meera Mithun is in big trouble it seems as her former manager is keeps leaking her private phone call conversations. Venkat, the former manager...