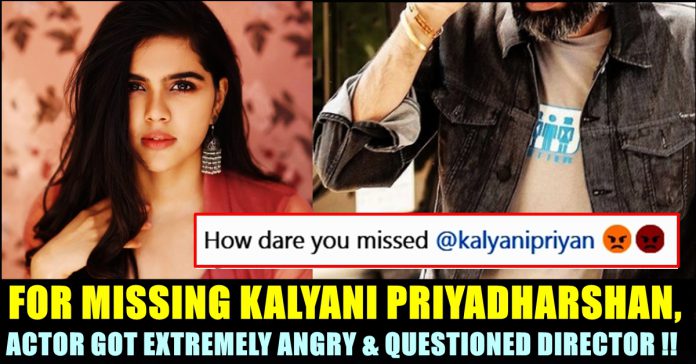 Venkat Prabhu’s directorial “Maanadu” is finally going to see the light it seems. The film which got initiated during mid 2018 with a first look poster, didn’t go on floors due to various reasons. Now, as actor Silambarasan started working on his projects in full swing, team “Maanadu” has announced that an exclusive update is going to surface in Internet by Thursday morning.

Unfortunately, Venkat Prabhu forgot mention Kalyani Priyadharshan, lead lady of the film. She who is going to pair with Silambarasan in the film, is a daughter of veteran filmmaker Priyadharshan. The 28 year old got debuted in Tamil film industry through Sivakarthikeyan’s “Hero” and was last seen in Amazon anthology series “Putham Puthu Kaalai”.

On seeing Venkat Prabhu forgetting to mention her name in his tweet, Premgi Amaren, brother of Venkat Prabhu, questioned his brother by posting a tweet by adding angry emojis. “How dare you missed Kalyani Priyadharshan” his tweet read.

Replying to this tweet of Premgi, Venkat Prabhu said “My bad” with folded hands. Here’s his reply tweet :

Check out some of the reactions from fans for this conversation between the brothers :

Maanadu, touted to be a political thriller, is being directed by Venkat Prabhu. The film is going to have SJ Suryah, Bharathi Raja, SA Chandrasekar, Manoj in supporting roles. Kalyani Priyadharshan got committed to do the female lead role. Simbu who completed “Easwaran” within a very short span, is participating in the shooting of “Maanadu” actively, reports suggested.