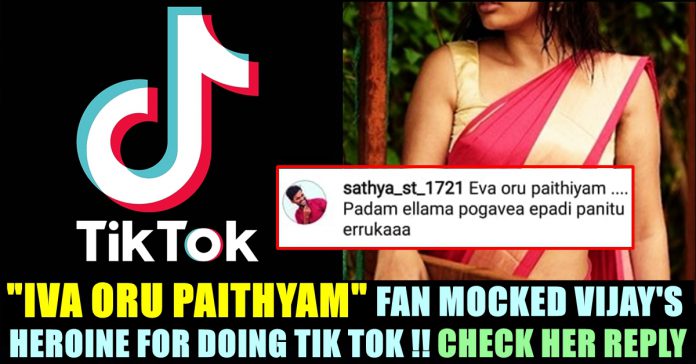 Actress Nanditha replied to a guy in Instagram who mocked the Tik Tok video she uploaded. The actress is known among Tamil audience for pairing up with Thalapathy Vijay in Puli, has already exposed a guy who send abusive texts to her in her inbox. (Also Read : Nanditha Exposed Screenshots Of Abusive Texts From A Random Guy !!) Some of her notable performance took place in movies like Ethir Neechal, Idharku Thaane Aasaipattai Balakumara, Mundasupatti, Attakathi etc. The actress who is busy in acting movies is also getting herself engaged in social media platforms, especially in the photo posting social media app, Instagram.

Having more than 5 lakh followers, Nanditha never missed to update about her daily routine to keep her followers engaged. On Wednesday, the actress uploaded a Tik Tok video of herself in her official Instagram account. She uploaded it with various hashtags such as Tik Tok, Video, Moves etc.

Watch the video she uploaded below :

As we all know Social media don’t know the value of the emotions expressed by the celebrities in online medium. Many high profile celebrities got trolled and abused by random social media users in daily basis. Some would upload their posts and would never turn back to it due to the intolerance of abusive comments where the others would give them back right away.

Though the video received more than ten thousand likes, few of her followers trolled the actress by saying that it didn’t looks cool. One of them had the courage to say that the actress is doing these kind of videos due to lack of film opportunities. He even mocked the actress by saying that she is mentally challenged. Nanditha who saw his comment immediately replied to him, in a way of mocking him back. “Poda Loose” she said to him and got the support of her other followers.

Check out the other replies gave by the actress to her followers :

Sharing the screenshot, Nanditha wrote “What shall we do to this kind of boys ?? Don’t they have family ?” in her story.

What do you think on these random Instagram users who are constantly bullying Nandhitha ?? Comment your views below !!

“I’m Not Looking For An English Professor” – CEO On Hiring A Skilled Youth With Lack Of English Speaking Ability !!

Mr. Arun Krishnan, CEO of nFactorial Analytics shared his experience on hiring an intern from a small town in Maharashtra. He ended up hiring...