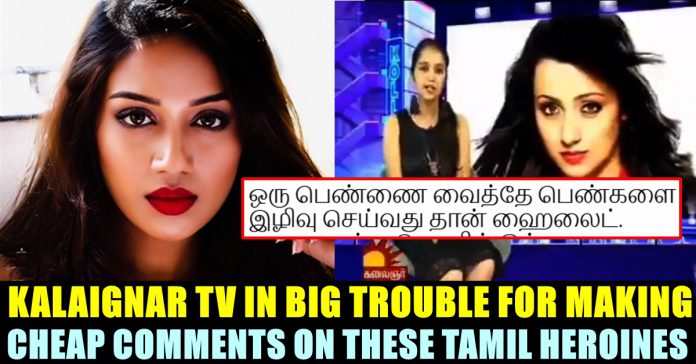 Men and women across the social media platforms are protesting day in and day out against body shaming and slut shaming remarks on women. Celebrities especially those who belongs to Cinema industry are easily targeted by offenders who would throw shades at them for their temporary happiness. Despite of several warnings and schoolings from high profile celebrities, trollers and abusers in social media are involving in posting sexist remarks against women in daily basis. Now, degrading female celebrities in terms of their looks and personal life has reached a way new low as a well known television channel made derogatory comments on few of the top actresses through one of their show.

Kalaignar TV which is very well known for producing innovative shows such as “Naalaiya Iyakkunar”, “Gaana Kuyil Paatu”, shocked the viewers of it through one of a show related to cinema. In the particular clips which are doing rounds in the micro blogging social media site, the anchor can be seen uttering double meaning phrases and obscene comments about some of the significant heroines of Tamil cinema. The most worst part about the video clippings that are going viral is, that the anchor who is hosting the show is a female herself.

The host of the show says that film opportunities got reduced for actress Aathmika who is known for acting in “Meesaya Murukku”. She goes on to add that she is conducting glamorous photoshoots to indicate that she is ready to do such roles. A video clip from “Mynaa” movie can be seen playing after the news only to degrade the actress more.

@aathmikaa For Your Information@KalaingarTV do you think this is Funny?
What Kind of Video You've Created?
Dr.Kalaingar Treated Women So Good. Pathetic to see this bad stuff from your channel.
Let @aathmikaa watch this and request some clarification with them pic.twitter.com/jRlhXDQWBL

The anchor, further goes on to mock actress Nivetha Pethuraj and her answer to a fan in Instagram about Love.

For Your Information @Nivetha_Tweets @KalaingarTV How Sick You're To Make and Telecast Those type of Content? Kids are watching.
Don't you guys ever noticed how sick this would Turn?
Let @Nivetha_Tweets notice about this and take some actions. pic.twitter.com/daVteomK9G

Makers of the show even decided to take a sly dig on the personal life of actress Trisha who is considered as one of the prominent actress of South Indian film industry.

@trishtrashers @kalaignartv how could you do this? Even the Anchor?
Anchor Tara Don't you think it's wrong?
This is Not Funny at all. How Stupid This Program is.@trishtrashers @aathmikaa@Nivetha_Tweets Do report them.
Such a Creepy Program I've ever seen. pic.twitter.com/ddN9yQ7dVR

These clippings are garnering severe criticism from the users of online. Many slammed the channel for their “below the belt” comment and wondered how the anchor accepted to utter such phrases. Check out some of their comments below :

Disgusting content by @kalaignartv_off
Even more disgusting than the content is this woman anchor Thara who will stoop down to any level with such a presentation for money! thooo @OfflVj https://t.co/MfuW37c4FB

This is atrocious @kalaignartv_off A whole program to belittle women actors on mainstreammedia is nothing short of discrimination and misogyntic at various levels. @KanimozhiDMK @mkstalin @Udhaystalin you cannot let such rotting practice of production go on in your channel. https://t.co/glAbOsAgsi

The entire crew should apogise and remove this content. @KanimozhiDMK Please note that Your channel produces such wonderful program on women. And actors are artists. They need to be treated with respect. @trishtrashers Please call out such trash@kalaignartv @kalaignartv_off https://t.co/7sgdfh1zeP

This is utterly disgusting. Pull this programme down on YouTube or wherever you have uploaded @kalaignartv_off and apologise. Also, sensitize staff- writers and anchors. https://t.co/DqGtItx9X3

Many journalists and activists in social media are demanding apologize from the channel and tagging some of the official accounts of DMK party to notify them.