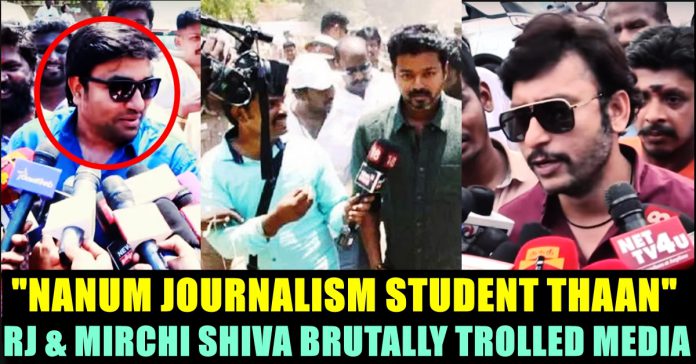 RJ Balaji who just made his debut as protagonist through the movie LKG, is still doing commentary for cricket matches. He is also known as a socially responsible person for the efforts he made along with actor Siddharth during Chennai floods. The movie he debuted as protagonist is also a political satire which made people think how important it is to vote for a good politician.

Known for his witty statements, RJ Balaji yesterday trolled the media people for giving unnecessary attention to the Nadigar Sangam elections which only has around 3000 members to vote. Not only RJ Balaji,Mirchi Shiva and Actor Vivekh also expressed their unhappiness on seeing Media running behind actors to grab audience.

When asked him to talk about the election, RJ Balaji sarcastically said that it is very important for the society. “Through this election, Rivers are going to get linked, problems of the farmers are going to get solved and GST will be reduced or cancelled.” to which everyone around him cracked up in laughter.

When one of a reporter asked him about Vishal’s performance last time, RJ Balaji again sarcastically said that he like his performance in the “Thupparivalan” movie. “Do you think Media failing to cover important affairs of state” asked one of the reporter to which Balaji said that there is nothing for him to comment on it as Media itself would accept it. “Me myself being a journalism student and media person, I know that you would accept it” said balaji who insisted them to cover Chithlapakkam lake desilting.

Mirchi Shiva also trolled media by saying “I am very proud of the service you guys are doing now. I thank you guys for working this hard even in this heat.” said Shiva who left by saying that he came from Tokyo only in the morning.

earlier actor Vivekh also asked media people not to give som much attention to Nadigar sangam election. “I appreciate the effort of you people on covering this election. This gives me happiness on seeing the hype you are creating. This is an election which involves just 2000+ workers. In the meantime, many serious thing takes place in this state. I request you to cover them and make people aware of it. Hundreds of students and public are desilting the lakes of Chithlapakkam and Manapakkam. Many people are posting videos on Rain water harvesting to make people aware of it. I appreciate you duty and can understand that you people are doing this because of prominent actors involved in this which will grab people’s attention. I request you to cover socially responsible things that I mentioned as well” the actor said in his interview.

What do you think on these statements from the actors ?? Comment your views below !!

Previous articleJasprit Bumrah Trolled Back Yuvraj Singh In A Most Unexpected Way !! You Just Can’t Believe !!
Next articleFan Blamed Shanthanu For The Fight Between Ajith & Vijay Fans !! Check How The Actor Reacted !!

Samantha’s Father Shared An Emotional Note About His Daughter’s Marriage !!

On Sunday, Joseph Prabhu, father of actress Samantha shared the pictures of her marriage with Naga Chaithanya with an emotional note. He said that...