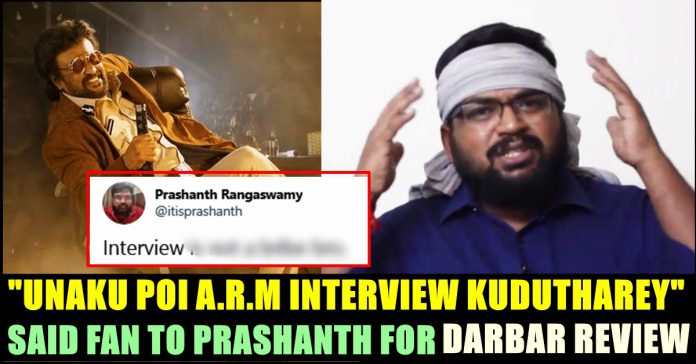 Darbar released in theatres today and fans are very much excited to witness the film. The film which revolves around the protagonist Adhithya Arunachalam ( Rajinikanth), has the every element of a Superstar movie. Apart from Rajinikanth, Nayanthara and Suniel Shetty, The film also features Prateik Babbar in a negative role and Rajinikanth is returning on screen as a cop after 25 years.

Rajinikanth played the role of a cop in 1992 released Pandian. The background score and soundtrack were composed by Anirudh Ravichander, while cinematography and editing were handled by Santhosh Sivan and Sreekar Prasad, respectively. As soon as the film released, reviews pouring from all directions of Internet.

Many impressed with the performance of the Superstar and few expressed their disappointment as well. Prashanth who is known for his movie reviews also expressed his opinion after watching the film. He wrote “DARBAR – Ok.”

On seeing this tweet, one of a follower who disliked this opinion of the reviewer wrote “unaku poi @ARMurugadoss interview lam kudutharu paaru avara sollanum😪”

As the user’s tweet, A.R Murugadoss has attended a promotional interview for “Darbar” hosted by Prashanth. To this tweet from the follower, Prashanth replied by saying “Interview is not a bribe bro.”

Interview is not a bribe bro. https://t.co/N3TpBQ7l9c

Check out some of the reactions for his tweet here :

U posted heavy reviews for utter flop movies in the first day itself.

But now #Darbar usually gaining +ve vibes everywhere but u were trying to degrade. Pathetic#Darbar

Superstar Rajinikanth is next to be seen in a movie by Siruthai Siva. The film which is tentatively titled as “Thalaivar 168” is going to be directed by “Viswasam” fame Siva. It was earlier rumoured that the director met the actor a couple of times in his resident. Siruthai Siva was also invited to Rajinikanth’s house to attend Golu during Navarathri. Sun Pictures, the production house which produced Rajinikanth’s Petta is going to fund money for this project as well. Music of the film is going to be composed by D. Imman who did music for Siva’s previous venture “Viswasam”

What do you think on this reply from Prashanth ?? Comment your views below !!

The Bigg Boss Tamil episode had the slaves in the house continuing their task. Senrayan again tries to convince Nithya about getting together with...

Social media don’t know the value of the emotions expressed by the celebrities in online medium. Many high profile celebrities got trolled and abused...