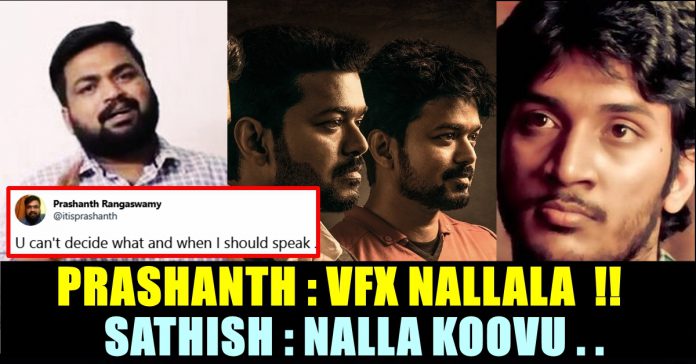 Bigil Trailer making waves in Internet since it got released. Fans of actor Vijay are celebrating the trailer like never before as they haven expecting this for a long time. No words could describe the craze level that is being created by Bigil Trailer. Director Atlee, who himself a biggest fan of actor Vijay, carved the actor inch by inch it seems. The film which marks the third collaboration of Atlee and Vijay, has actor Vijay in the lead in three different get ups.

The trailer ticks all the boxes of the expectation list of a Vijay fan. Looking like a emotional action drama, Bigil trailer promises an absolute treat for the fan who are waiting for it since past one long year. As soon as the video released it reached more than 1 million likes.

Not only fans, many celebrities including Shah Rukh Khan were reacted to trailer in a positive way. Meanwhile popular Kollywood reviewer Prashanth who is known for his unique way of reviewing movies posted his opinion on the Bigil trailer.

This tweet from Prashanth received many comments as replies. Dance Master Sathish who is busy in choreographing for songs in tamil movies, disappointed with the instant review of Prashanth and expressed his frustration through a reply. Check out his reply below :

Prashanth who witnessed this tweet from Sathish immediately countered back. “Being a dancer, you have to play, I will sit and watch” he said in his reply tweet.

The conversation suddenly turned into an argument after Sathish directly asked Prashanth to post his reviews few moments later as it is a time to enjoy the trailer.

To this comment of Sathish, Prashanth firmly replied by saying that no one can decide when he needs to speak. He even asked the dance master to block or unfollow him if he needs to get rid of him.

U can't decide what and when I should speak . If u do not like my comments, there is always a choice to ignore, instead of playing the hero. https://t.co/NoIDH4kR9A

The argument didn’t end there as Sathish continued to mock Prashanth.

Dhayanithi Alagiri, producer and the founder of cloud nine movies, asked both of them to stop fighting.

Check out the screenshot of their entire conversation :

What do you think on this verbal spat between the both ?/ Comment your views !!

Previous articleVivek Accidentally Replied To The Million Dollars Question On BIGIL Trailer !!
Next articleMeera Mithun Threatens “Moodar Koodam” Director To Release Video !! Check Out His Reply To Her !!

Chinmayi openly bashed at the veteran filmmaker Bhagyaraj for his speech on women about being safety. Followed by Radha Ravi and few more...

Rachitha Trying To Put All The Blame On Dhana??

On Sunday episode, Ulaganayagan Kamal Haasan condemned Dhanalakshmi for breaching the rules of Bigg Boss and trying to claim the victory. He also warned...