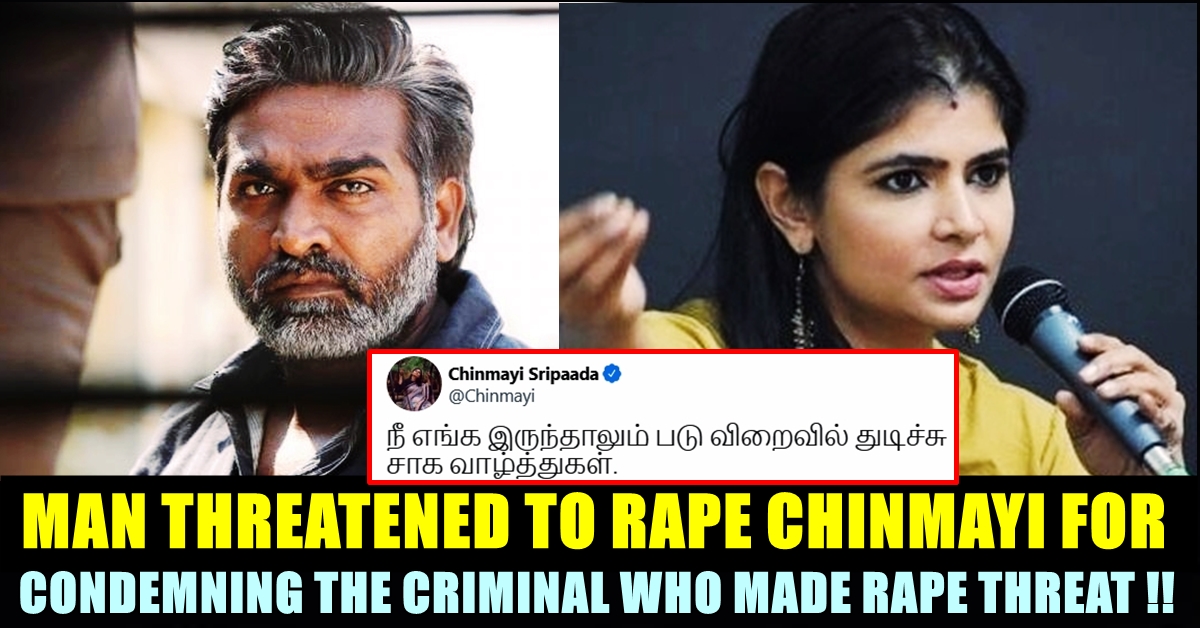 For condemning the criminal who made rape threat against the daughter of Vijay Sethupathi, a twitter user threatened to rape singer Chinmayi and made casteist slur against her. The singer who is known for standing up against the sexual predators, exposed the guy who made such comment by replying to him.

The cyber crime unit of Chennai police has traced down the IP address of a Social media user who issued rape threat to Vijay Sethupathi’s daughter. It has been reported that the accused is living in Sri lanka. Chennai Police are reaching the Sri lankan authorities to nab him.

From national award winning director Cheran to political personalities including Kanimozhi, Vijayakanth, Thirumurugan Gandhi raised voice against the miscreant who posted extremely disgustful comment against Vijay Sethupathi and his daughter. They wanted the culprit to get immediate punishment to prevent such crimes taking place in the future. On seeing his profile, the accused whose twitter handle name reads as “Rithik” seems to be a serial offender as he is making similar comments on various posts of celebrities including Sachin Tendulkar for past several days.

In a post shared by Vijay Sethupathi about the celebration of his Pizza movie’s 8th year anniversary, a miscreant wrote a tweet threatening to rape his daughter for accepting to act as Muttiah Muralitharan in his biographical picture. Ever since the tweet surfaced, People demanding immediate arrest against the one who posted the comment. The culprit used actor Ajith kumar’s photo as display picture and identified himself as a “Thala” fan.

Vijay Sethupathi announced that he is walking out of “800 the film” after Muttiah Muralitharan requested him to remove himself from the project as he is worried about his future ventures. Hours before the announcement, the disgusting tweet was posted in the comment section of Vijay Sethupathi’s tweet. Singer Chinmayi has been constantly raising voice against the criminal through her official twitter account.

Chinmayi, while sharing the tweet said “A tamil man expressing his difference of opinion. This is why people in this state are supporting criminals who committed sexual crimes. Is nobody in this system going to change this? A man who can say in public about raping a child is a criminal.” her tweet read.

She also kept updating about the development of the case through her twitter account. On seeing her activities, a Twitter user named as Thiyagarajah, posted an abusive tweet against her. Replying to him, Chinmayi asked him to face her in person.

“These kind of men think that posting such tweets will make them real man. Majority number of men in social media are thinking this way. If we point them out, they will get angry. Why Corona didn’t kill these men?” she wrote in her next tweet.

She continued to slam him with her tweets.

The fact that Twitter allows such verbal assault day in and day out in the name of freedom of speech is appalling. Such abuse is not a big deal for men but a rape threat has a real life meaning to women – this is something most men don't understand.

Hey @Twitter
When will you start taking the issue of rape threats on this platform seriously?