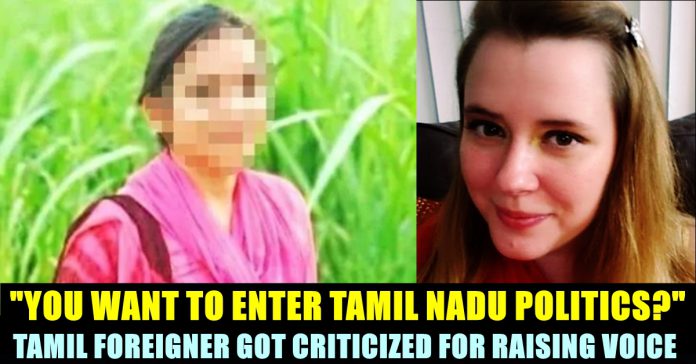 Oliviya Peterson, a popular twitter personality who is known among the users of it for her love for Tamil language, has condemned the happenings that are taking place in Hathras, Uttar Pradesh. On seeing her reactions, a number of Tamil twitter users criticized her and asked whether she is going enter Tamil nadu or Indian politics. Responding to them, Oliviya released a video explaining that what she did it beyond politics and added that the evil men must be condemned.

After a 19 year old girl got brutally raped and killed by four men in Hathras of Uttar Pradesh, Police officers of the state reportedly cremated the body by taking it from the hospital without the family’s permission. This incident created huge outrage across the country and made people slam the government being run by Yogi Athithyanath in the state.

District officials contended that they had consent from the woman’s family, but the manner in which the developments took place raised questions over the conduct of the administration and law enforcement. The woman succumbed to injuries in Delhi on Tuesday and the body was moved later that night to her home town 200km away. The cremation was carried out at 2.30am amid heavy deployment of police, who stopped locals and the media from approaching the site.

“The police have forcibly taken the body and my father along with them for cremation. When my father reached Hathras, he was immediately taken (to the crematorium) by the police,” said the victim’s brother to the media. The 19 year old girl was dragged by her Dupatta and raped by the four men when she was picking grasses in a field with her Mother who has hearing issues.

The men arrested for the crime will now face charges under section 302 (murder) of the Indian Penal Code, according to Hathras superintendent of police Vikrant Vir. This news grabbed the headlines and Olviya, an American woman who loves learning Tamil language was notified about it by her fellow twitter users.

“What a shame.. praying for the family…how traumatic” she wrote in her tweet on seeing the news about the forced cremation.

“Getting into Tamil nadu and Indian politics!!. How about Trump-Biden debate? Felt like debates in Indian news channels.” asked one of a follower on seeing this opinion of Oliviya.

Getting into Tamilnadu and Indian politics!!. How about Trump-Biden debate? Felt like debates in Indian news channels.

“I only watched a small portion on it. It was very immatur… Reminded me of two children arguing. We might get to vote but there really is not a choice between two good candidates. Woman shrugging I am not really in to politics.” Oliviya replied.

I only watched a small portion on it. It was very immatur… Reminded me of two children arguing. We might get to vote but there really is not a choice between two good candidates. 🤷🏼‍♀️ I am not really in to politics.

Followed by this, Oliviya released a video saying that condemning a crime doesn’t have to do anything with Politics. “Commenting on the death of a young 20 year old Dalit girl is not politics. That is calling out an evil for evil.”. Oliviya further said that she couldn’t imagine the trauma the girl could have went through during her final moments. “Can you imagine yourself in her shoes?” Oliviya asked who also worried about the victim’s parents. She reiterated that what she said has nothing to do with Politics.

Here’s another video she uploaded for a man who asked whether she want to enter politics.

If I was scared of what other people thought of me trust me when I say I would never have entered into your world 🙏 learning Tamil and the culture has been one of the most rewarding things I have done but has also opened me up to mass criticism. https://t.co/1ESvXrh2Ts pic.twitter.com/6xK5yzntAF

Previous articleFollower Advised Maxwell’s Girlfriend To Leave Him!! Here’s Her Reply
Next article“I Never Saw You In BIGG BOSS”- Young Aspiring Actress Got Trolled For Her Post !! Check Her Reply