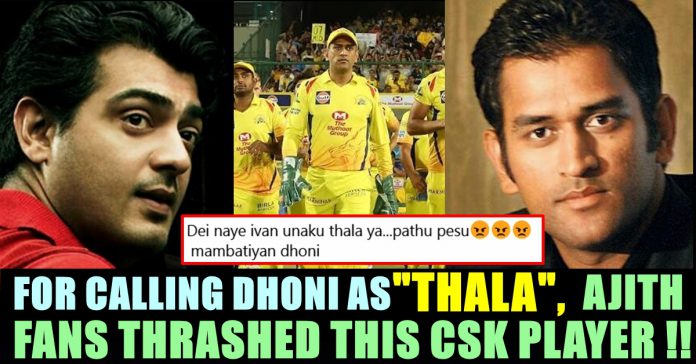 For calling former Indian captain MS Dhoni as “Thala” in his social media post, former Chennai Super Kings player Subramaniam Badrinath got trolled by the fans of actor Ajith Kumar. Badrinath played with Dhoni in Indian Premier League till 2013. After that he represented Royal Challengers Bangalore in 2015. Now as Dhoni reached Chennai to practice for the upcoming season, Badrinath has met him and posted a picture of himself with Dhoni.

MS Dhoni and Chennai Super Kings – two names which have become synonymous after all these years of the Indian Premier League. The CSK-skipper has been accepted by Chennai and is fondly known as Thala. The rapturous cheers for every Dhoni-movement on the field is reflective of his huge sway over the crowd.

Uploading the picture, Badrinath wrote “Was nice to Catch up with a friend… #Thala”

Was nice to Catch up with a friend… #Thala pic.twitter.com/74C4NezAKK

Though the picture received as many as twenty four thousand likes, many fans of actor Ajith Kumar spread hatred towards the post. Despite many fans of Ajithkumar accepted Dhoni as “Thala” as he hails from completely different field, some fans irked on Dhoni being called as “Thala”. They expressed their disappointment towards the post of Badrinath through comments section.

As both the personalities are leading a successful career in their respective fields, it would be much more healthier if both the icon’s fans gets united and support each other as they both are trying hard to entertain the people of Tamilnadu. What do you think on these comments ?? Let us know your views !!

To a hater who constantly criticized him blaming the pitch, Ravichandran Ashwin gave him a fitting reply referring to an old incident. Nibraz Ramzan...

SJ Suryah who is very well known for his directorials, is now busy in acting feel good films. Followed by his adventure drama “Monster”,...