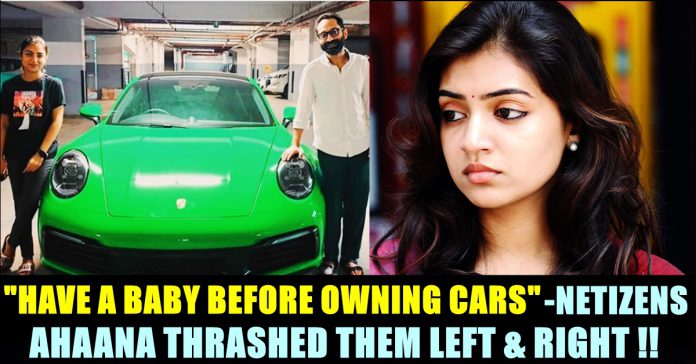 On seeing the happening couple of Mollywood Nazriya and Fahadh Fazil gifting themselves a luxury car, they got subjected to online criticism. Though the duo didn’t react to the mindless trolls, Ahaana Krisha, a Kerala based actress posted a story giving them an epic reply. In her reply, Ahaana said that it shows the people’s jealousy over successful people.

On 21 August 2014, Fahad and Nazriya got married. The pair got to know each other more on the sets of Anjali Menon’s Bangalore Days. Recently, they bought Porsche car’s 911 model which worth Rs. 1.90 crores. The couple is the first one to own the python green car in India, according to reports.

While sharing the series of pictures of the car, Fahad added a green colour heart as caption. Check out his post below :

Many congratulated the duo on becoming the owner of the luxurious car. Few even awed at the price of the stylish car in the comment section. Fans of the duo lauded them for the kind of contents they are giving to Malayalam cinema. However, trolls didn’t spare them.

The couple mind such inhumane comments but Ahaana krishna, an actress who is known for acting in films such as Njandukalude Nattil Oridavela and Luca came in to defend them. The actress called such comments as “poison” and asked them to be happy for others.

“When people cannot hold back their jealousy, they spit it out as poison like this. To people who post such comments, I’d like to remind you that..what’s clearly visible is here is nothing but your jealousy when something good has happened in another persons life. Try being happy for other people. It will help you in trying to keep your mouth shut at unwanted situations” Ahaana wrote by sharing the screenshot of the inappropriate comments.

Nazriya is known among Tamil audience for her appearance in films such as “Neram” and “Raja Rani”. Her cute expressions and dialogue deliveries gained her a huge fan base in Tamil nadu in a very short span of time. When her market in Tamil cinema was in peak, the actress left the industry and married Fahad.

Fahad is known among Tamil audience for his appearance in films such as “Super Deluxe” and “Velaikaaran”. Considered as India’s one of the seasoned actors, Fahad always gave importance for strong contents which gave him fame across the country. Now he is currently busy acting in a film named as “Irul”

Comment your views on these kind harsh comments from netizens towards Nazriya and Fahad!!

Previous articleYogi B Replied To Somashekar Who Didn’t Give Credits For Singing His Song !!
Next articleAshwin Slammed People Who Signed Petition To Remove Jadhav !! WATCH