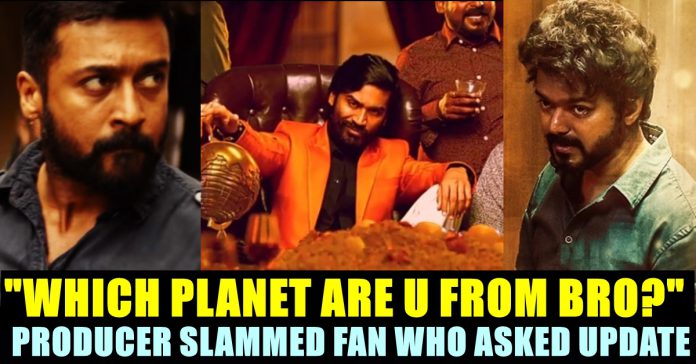 For Asking Movie Update At This Situation, Producer Slammed Fan !!

As 21 days lockdown is implemented, people from across the country are staying at home and hoping for the crisis to end soon in order to get back to the normal life. COVID 19 which killed more than 37,000 people is a serious threat across the world right now. To avoid community spread in India, Prime minister of the country asked people to stay home for 21 days which is till April 14. However, to kill boredom, many people are involving in several activities in social media.

People are glued to Internet to kill the quarantine period. Right from high profile politicians to cinema celebrities, everyone are sharing how they are killing the time and giving suggestions to their followers. Many of the heroines are also conduction chat sessions with their fans as they are forced to be in home. Movie, Serial shootings and post production works are also interrupted due to the lockdown.

Meanwhile, producer Sashi Kanth who is known for producing successful films such as Tamizh Padam, Kaaviya Thalaivan, Irudhi Suttru, Vikram Vedha through his Y not studios replied to a fan who asked update on his upcoming film “Jagame Thandhiram” which is going to have actor Dhanush in the lead role. The makers who released the motion teaser of the film, earlier said that there will be updates during the end of march.

Now, one of a twitter user who seems to be an ardent fan of actor Dhanush, questioned the production house about the updates and promotions on 28th of March. “What happened to the updates you promised to give us?” asked the fan by tagging Dhanush and producer Sashikanth.

Sashikanth who is not in a position to give an update at this critical situation, asked the fan “Which planet are you from brother ?”

Which planet are you from brother ? 😎

To another Twitter user who argued that there is no connection between giving an update in Twitter and the Corona pandemic, Sashi said “Sure …. can you please update when the #CoronavirusOutbreak will end ? So Once you give me a confirmed date, I will also update . Ok bro ? Now”

Sure …. can you please update when the #CoronavirusOutbreak will end ? So Once you give me a confirmed date, I will also update . Ok bro ? Now #chillbro 😊🤗

Jagame Thanthiram is being directed by Karthick Subbaraj and contains the music composition of Santhosh Narayanan. The makers earlier announced that the film will be released on the 1st of May month. Not only Jagame Thanthiram, most expected movies of the year such as Master which was expected to release in mid April and Soorarai Pottru of Surya are also likely to be postponed due to the corona crisis.

What do you think on these replies of Sashi ? Comment your views below !!