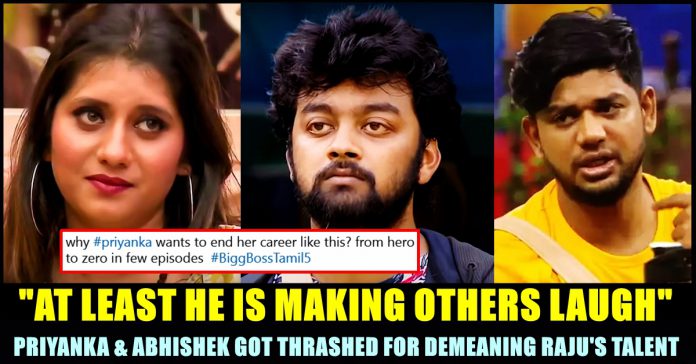 Priyanka and Abhishek continue to face the wrath of public after demeaning Raju’s mimicry abilities by saying that he is involved in doing it to gain his mileage and to prove himself as an entertainer among the audience and his co-contestants. Abhishek went one step ahead and concluded that Raju is making his co-contestants laugh only because of what he said to Raju about his performance in the ongoing show. “I challenged him earlier today and asked him to do something exciting” Abhishek said to Priyanka who sighed after seeing Raju performing in front of his housemates such as Akshara, Suruthi, Chinna Ponnu, Annachi, Thamarai etc.

As a result hashtag “Priyanka” is trending in the micro blogging social media site with reactions slamming Priyanka and Abhishek. A cold war is going on between Raju and Priyanka, Abishek ever since the coin task started. Even before that, the duo tried to make Raju tell the name of the contestants he nominated for elimination in the confession room, However, Raju denied to say it and said that the rules of Bigg Boss house restricts it. They also wanted him to tell where his coin is and confronted him during the task.

When Abhishek tried to make a statement about the “Kana Kaanum Kalangal” actor, Priyanka asked him to stop talking about him. Now, in the 19th day of the cash-rich show, Raju who has been entertaining audience and his co-contestants through his one liners, counters, short stories and mimicry abilities from the very start, performed a series of voices and made everyone laugh.

He effortlessly brought the vehicles such as car, bike, auto and bus inside the Bigg Boss house through his mimicry. The aspiring actor also imitated Superstar Rajinikanth, MR Radha, SJ Surya by attempting their voices. The way he talked how a mic echo would sound in an outdoor function impressed many including Cibi. Almost all the contestants were laughing and asked him to do other different voices. Suruthi who was sitting by his side, adjusted his mic to make sure his voice is getting recorded in the camera.

Priyanka and co who were sitting in the next room, saw Raju and reacted in the other way around. Priyanka said that he started to “do” it again whereas Abhishek said that Raju is “pity” by adding “let him do”. “Earlier today I challenged him to do something exciting” said Abhishek denoting that Raju is entertaining others only because what Abhishek said to him. Priyanka sarcastically trolled Abhishek asking whether he is a judge of a show and compared him with Kala master and Simbu who are known for judging reality dance shows.

Audience who watched the same, expressed their dejection over Priyanka and co for spewing hatred at Raju who was simply entertaining others instead of sleeping or talking behind the back of others. “Priyanka , Abishek trying to demean Raju .What else will come out of these toxic people? at least Raju is making others laugh but these two will always create only anxiety””a twitter user said with many others opining similar comments.

When #Raju does mimicry ,#BondaTeam #Priyanka ,#Abishek trying to demean Raju .What else will come out of these toxic people? atleast Raju is making others laugh but these two will always create only anxiety 🤮🤮#BiggBossTamil5 #BiggBossTamilSeason5 #BiggBossTamil

Terrific mimicry by #raju . Wat a talent. And understandably #priyanka not able to digest the applause. #BiggBossTamil5.

#Priyanka s name totally damaged, she is the one damaging her name badly. She can never come back in this Bigboss #BiggBossTamil #BiggBoss5 #BiggBossTamil5

why #priyanka wants to end her career like this? from hero to zero in few episodes #BiggBossTamil5

I would say வயித்தெரிச்சல் is for priyanka, even though Abhishek is bad, he always admires raju for his talent but did you see priyanka's reaction to raju's mimicry?

This is exactly the reason why #Priyanka is jealous and annoyed with #Raju.
1. Talent
2. His nature to attract everyone
Nee evalo kathinalum, naai mathiri korachalum onnum nadakathu 🤣 go spread your positivity somewhere else#BiggBossTamil5#BiggBossTamil#BiggBoss5Tamil

Siddarth, a 21-year-old engineering student from Tamil Nadu was arrested for blackmailing her girlfriend to install a spy camera in her hostel washroom. He...