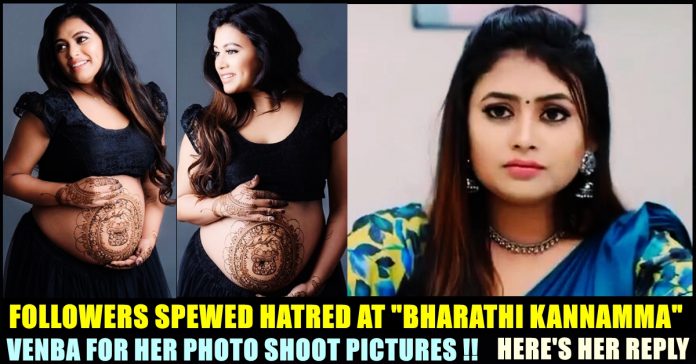 “Bharathi Kannamma” fame Farina who is popularly known as “Venba”, her characted, recently revealed that she is pregnant and has been uploading pictures from her maternity photo shoot sessions in her official Instagram handle. She who received care and wishes from many of her 8 lakh followers initially, started receiving hatred after a point. The TV actress who restrained herself from reacting to such comments, couldn’t resist herself from uploading a screen shot of one of the messages she received in which we could see a follower spewing hatred at the actress for no particular reason.

The follower, in her/his message said that God has given such a wonderful blessing of providing birth to a child to a person like Farina and said that she will lose the happiness in midway. The follower also expressed his/her happiness over the actress losing her happiness by adding laughing emojis. Capturing the screen shot of the message, Farina, uploaded as her story and sought help from her other followers. She wanted all of them who threw shade on her to make an apologize.

Farina plays the role of “Venba” in the serial “Bharathi Kannamma” which contains negative shade. The TV serial is being telecasted in Vijay Television and rose to fame soon after serial became a hit. Currently, Farina is enjoying 8 lakh plus followers for her Instagram handle after uploading 1278 posts. For the past few days, Farina is very much involved in conducting maternity photo shoots and has been uploading pictures which were captured in it.

Reacting to one of her posts, a follower sent a message to Farina writing “Unaku lan kadavul ipdi oru baakiyatha kuduthurkaruu paruuuu, padhile santhosam poiraa poguthu hahaa” which is literally translated as “God has blessed people like you with pregnancy, your happiness will fade midway”. Farina, uploaded the screen shot of her message, wrote “I’m seriously done with these kind of people ! Help me guys !! I want all of them to apologize”

Another follower made similar comment and the actress replied to him saying “This shows who you are ! your eyes and heart are ugly ! Get well soon”

According to various media reports, India skipper Virat Kohli is all-set to attend the selection meeting at the Board of Control for Cricket in...