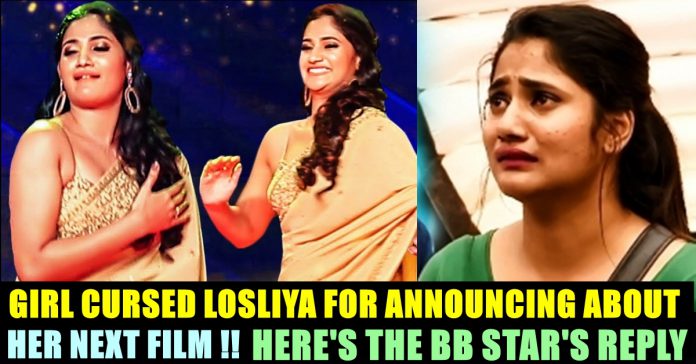 Former Bigg Boss contestant and aspiring actress Losliya announced about one of her upcoming projects through her official Instagram account where she is enjoying 10 lakh followers. Among the several wishes from her fans and followers, she also came across some harsh comments. However, the sri lankan based newsreader replied to almost all the comments in her way.

Losliya who became a overnight sensation through her Bigg Boss stint, is currently having three film projects in her kitty. Bigg Boss season 3 successfully ended with Mugen rao grabbing the title. Sandy became the first runner up where as Losliya was pushed to the third place. Since the show, Losliya was seen conducting photoshoots. In one of her projects, Losliya is sharing screen space with Indian veteran cricketer Harbhajan Singh. The film is also going to have action king Arjun in a prominent role.

In another project Losliya is going to pair with actor Aari who is known for appearing in “Maaya”, “Nedunjaalai” etc. Recently Losliya announced about her another project with Axess Film factory which is known for bankrolling films like “Ratchasan”, “Oh My Kadavule” etc. The film is going to be directed by debutant JM Raja Saravanan. Pooranesh who worked as executive producer with the production house is going to play the male lead.

📢#AFF10 will be Directed by debut @JMRajasaravana1 *ing @k_pooranesh & @Losliyamaria96 this vibrant team if full of energy and we assure another content oriented movie from @AxessFilm @Dili_AFF @DoneChannel1 Other cast & crew announcement will be made soon. pic.twitter.com/OD3j8qZraL

According to the filmmaker, the film is going to be an action packed thriller. He says that Pooranesh got selected to play the male lead after attending the audition. On talking about having two debutants as leads. he said that the story required new faces. The film’s pre production was completed and the crew are planning to go on floors post lockdown.

Meanwhile, actress Losliya, in her official Instagram account uploaded a post in which she and Pooranesh can be seen posing for a photograph. “I’m really happy to announce my next project 😇” she wrote as a caption for her post.

Swipe to see the next picture :

Wishes from her followers poured for the young actress in the comment section of the post. Some of those who are following her only to spew hatred against her made negative comments in the post as well. However, Losliya, while thanking her fans, gave back to the negative comments.

One of a follower who saw her replying to many of her fans, said that she is doing it just to promote her film to which Losliya replied by writing “silly thoughts”.

Another follower said that the film would definitely become an utter flop. Replying to her comment, Losliya, referring to a popular humorous phrase of politician Seeman, wrote “Vaipilla Raja” with a laughing emoji.

On seeing the updates about her films, an Instagram user said ‘Let’s see if any these films gets a release first” to which the Bigg Boss star said that movies will release after COVID 19 outbreak.

One more user wrote “Happy Married Life” in her post to which she asked “Why so random?”

Losliya garnered widespread fame after appearing in the third season of Bigg Boss show. She was involved in an alleged relationship with TV actor Kavin inside the Bigg Boss house which resulted in the emergence of enormous number of fan accounts such as “Kavliya”, Kavin Losliya” etc. They are constantly demanding the duo to do a film together through their comments as well.