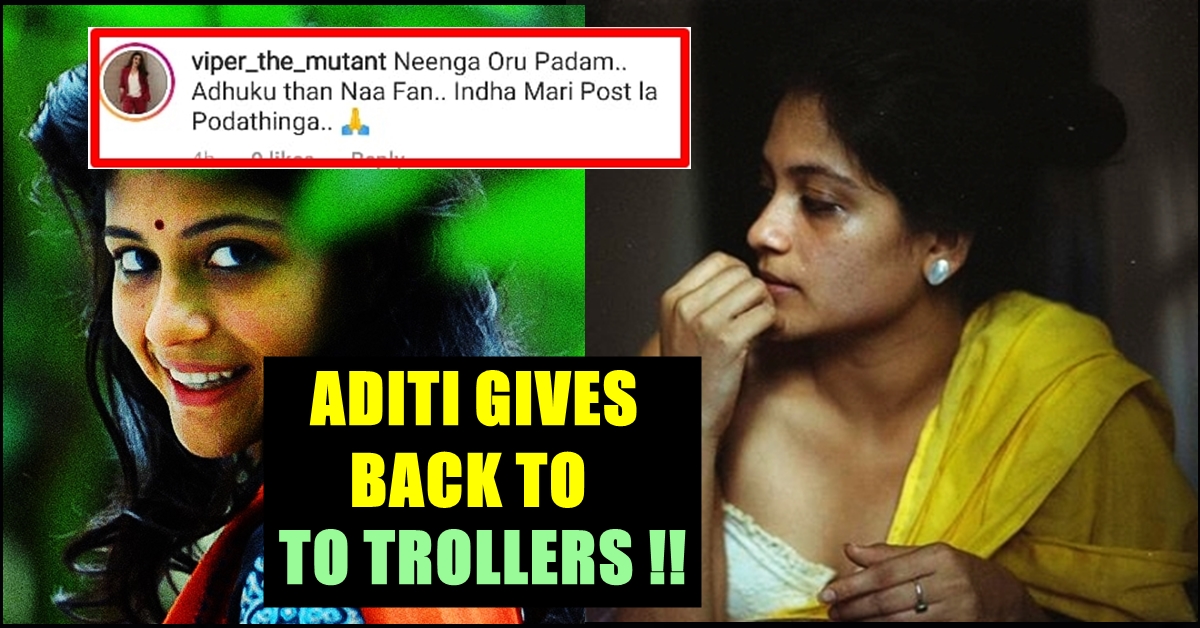 Internet trolling is something which is almost every celebrity in the world are facing in daily basis. Some won’t mind the trolls they are receiving but some will get offended and give it back to the trollers right away. Now Actress Aditi Balan who is known for her much appreciated film “Aruvi” has reacted to the comments she received for her latest Instagram posts.

Aditi initially featured in the movie Yennai Arindhaal (2015) featuring in the song “Mazhai Vara poguthey” in which she comes as friend around Trisha. Her next film, Aruvi, was critically acclaimed and brought her much recognition and awards.

Aditi is one of the many actresses who is very much active in social media platforms. Having more than 2 lakh followers in Instagram, Aditi recently post few pictures in Yellow Saree. The actress looked so elegant with her attire and the way she posed for the natural lightings was loved by many of her followers.

Lazy mornings ! @izhaiindia @lakshmanan.palani @sanjana_ravi31 @priyan_yt Also , the insta bug has been fixed in these pics and hence the repeation on pics.

Though the actress slayed in her own style through the pictures, it didn’t go well with a separate set of her followers who started showing their disagreement in the comments section. One of them said that he lost the whole respect on the actress.

On seeing these kind of comments, another user supported the actress and suggested her to ignore negativities. He even asked her to avoid responding to them. While replying to that comment Aditi made it clear that their comments are not bothering her at all. The actress wrote “sometimes I just feel like replying to them , not cos it bothers me but just for jolly.”

The actress who got several accolades for her role in “aruvi” is very much expected to announce about her next project. Comment your views on the way Aditi handled her followers !!

Youth Requested Collector To Help In Closing Abandoned Borewell !! Here’s His Response !!
BIGIL Is Not The First Film For Amritha Aiyer & Vijay !! Check Out Their First Film !!